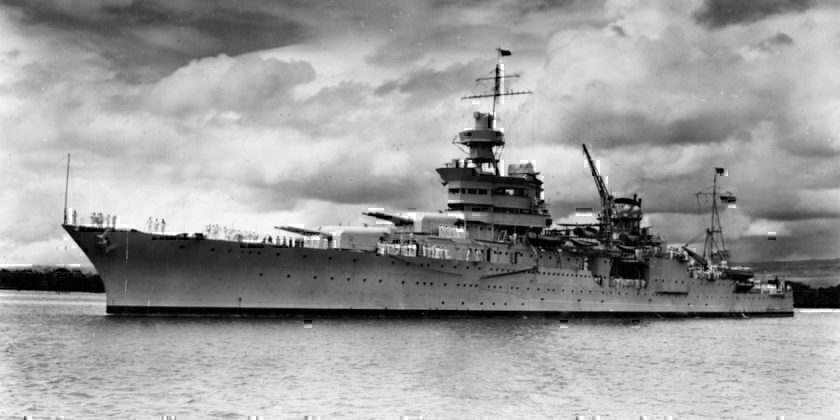 Billionaire Paul Allen is known for founding Microsoft alongside Bill Gates, but after the events of the past week, he’ll also be known for helping to find an American warship missing since the end of World War II.

That vessel is none other than the storied USS Indianapolis, a Portland-class heavy cruiser which served the Navy for just under 15 years before being torpedoed on its way to Okinawa in July 1945.

The wreckage of the Indianapolis was discovered in the Philippine Sea, where it was lost upon completing a top secret mission to deliver parts for the “Little Boy” atomic bomb that would be dropped on Hiroshima. On its homecoming voyage, the cruiser was attacked by a Japanese submarine, caught completely unawares.

At the time of its loss, the Indianapolis was, for all intents and purposes, a “ghost.” Due to the secrecy of its mission to run nuclear weapon components to the Northern Mariana Islands, it was left out of rosters and no return or deployment was scheduled on paper.

Thus, its whereabouts of the ship were wholly unknown to all but a handful of ranking officials and officers outside the vessel’s crew.

It sank rapidly in deep shark-infested waters, taking hundreds of its crew with it before they could escape the sinking ship. The surviving crew were left adrift at sea without rations or enough lifeboats to hold them. Further complicating matters was the fact that no Allied vessel operating in the area received the ship’s frantic distress signals, meaning that help was definitely not on its way.

The survivors were picked up four days later, entirely by luck. A Ventura patrol aircraft on a routine surveillance flight happened upon clumps of the sailors floating around the Philippine Sea, with no ship in sight. Of the 1196 crew aboard the cruiser, only 321 were pulled out of the water, four of whom would die soon afterward.

Exposure to the elements, starvation and dehydration were some of the primary causes of death for the survivors adrift at sea, as were shark attacks. In fact, rescue pilots were so desperate to get sailors out of the water upon seeing shark attacks happening in real time, they ordered the survivors to be strapped to the wings of their aircraft with parachute cord once the cabin was filled to capacity.

Over seven decades after the Indianapolis went missing, Paul Allen’s research vessel, dubbed the “Petrel,” found the lost ship in 18,000 feet of water, resting silently on the ocean floor. The search has been years in the making, and was ultimately successful thanks to advances in underwater remote detection technology.

This isn’t the first lost warship found by Allen’s team. In 2015, they were also responsible for discovering the Japanese battleship Musashi  — one of the largest battleships ever built — sunk during the Battle of Leyte Gulf.

The Indianapolis is officially still considered property of the U.S. Navy and will not be disturbed as it is the final resting place for hundreds of its deceased crew. Its location will henceforth only be known to Allen’s search team and the Navy.