Patriots Day: A Must-See Movie for All! 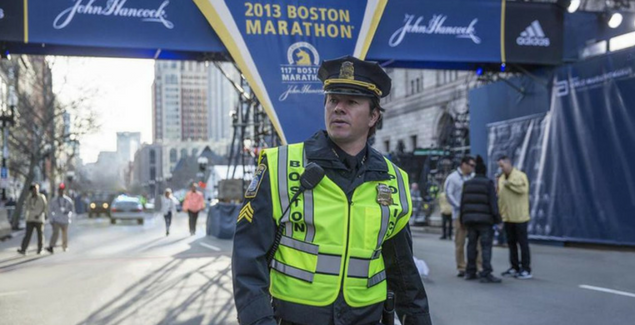 TODAY, the movie Patriots Day by Peter Berg, the director of “Lone Survivor” and “Deepwater Horizon,” hits theaters — and this is one movie that should be required viewing for all.

“Patriots Day” is the powerful story of the Boston Marathon bombing and a community’s courage to respond and come together in the face of adversity.

Like their previous collaborations in “Lone Survivor” and “Deepwater Horizon,” Peter Berg and actor/producer Mark Wahlberg consulted with, hired and cast veterans. In addition to these cast and crew, many law enforcement characters in the film were played by actual officers, many of whom are also real-life veterans. Academy Award-winner J.K. Simmons also plays Army veteran and Watertown Police Sergeant Jeffrey Pugliese, who is quoted as saying, “I don’t consider myself a hero — we’re just a group of ordinary guys who were put in an extraordinary situation, and we just performed extraordinarily.”

The movie is fast-paced, intense, emotionally moving and at times hard to watch. But necessary.

I had the chance to preview the movie with local expert on disaster response, Dr. Robert Mitchell, Director of Community Disaster Medicine/Beth Israel Deaconess Medical Center Fellowship in Disaster Medicine, an Affiliated Fellowship of the Harvard Humanitarian Initiative. We both agreed that while it tells a great story, it lacks a necessary call to action: Get prepared. And have a solid, practiced, drilled and rehearsed response plan — not a “check-the-box” plan.

What the movie didn’t share was that a number of Boston Hospitals were “at-the-ready” because they use the Boston Marathon as a training event. They were more than staffed – on all emergency response fronts.

Then you pull in the Boston community — well, that is a “Brotherhood” that can face and overcome all challenges.

When I asked Dr. Mitchell his thoughts, he shared the following:

“The centerpiece segment/message about ‘love’ serves questionable purpose as a take-home message. The message that should have been portrayed was that of vigilance and preparedness. Missed the boat.

“The audience was left with the wrong impression, a feeling that the ‘job is done.’ Far from it. There is a war going on. We as a nation must be prepared to respond to such events more effectively to save lives. Boston is better prepared than most cities due to the fact that the Marathon is used as a massive preparedness exercise each year for disaster.

“The story was well-done. The PTSD portrayed by Mark Walberg is real and is being experienced by many of those directly harmed, as well as those in proximity to the explosions, not to mention those in the EDs (emergency departments) of the receiving medical centers.”

Some communities are taking the “get prepared” message seriously. In Snohomish County, Fire District 1 and the Disaster Medicine Project continue in their efforts to educate the community on disaster preparedness so its residents at least have an idea of what to do in natural disasters.

But do you know what to do in an active shooter event or terrorist event?

Communities no longer have the luxury of stating, “This won’t happen to our community.”
Most, if not all, veterans have training in basic first aid, decontamination protocols, family reunification and communications. Leveraging that asset is one way a community can position itself to be better prepared.

Bottom line: Patriots Day, despite its lack of a solid call-to-action, is still a “must-see.”