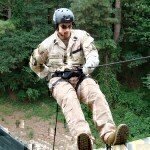 I want to become a voice and advocate for the people and community I serve. My military experience has given me judgment, insight, and leadership skills needed in healthcare. I plan to teach after completing a PhD at the NYU Silver School of Social Work. As an MSW student at Silver, I combine critical thinking skills with social work knowledge while advocating for those with similar backgrounds. I see myself as an advocate while serving in the Navy and as an undergrad at St. John’s University where I raised awareness of issues impacting veterans and their families, cofounded a Student Veterans Association, established a chapter of the National Veterans Honor Society, and helped establish a Veterans Success Center. I remain active in veteran activities by mentoring through the Pro Vetus (f/k/a: Battle Buds) program out of Columbia University’s Teachers College, and my work-study position at the Manhattan Veteran Affairs Hospital.

Initially, I intended to become a “lifer” in the military. Due to a chronic autoimmune illness, I received a medical discharge – ending my plan to serve in the Navy for 20 years. After exploring various employment experiences, I had an epiphany that government contract work would not provide steady employment for a Naval Special Operations Parachute Rigger with a Federal Aviation Administration (FAA) license as a Senior Parachute Rigger. I worked for three different employers within a two-year period. Unlike myself and fellow veterans, I discovered that my civilian counterparts had, at least, an undergraduate degree. Thanks to the Post 9/11 G.I. Bill, I was able to offset daily living expenses with a stipend. The Department of Veteran Affairs (VA) paid for my tuition and related fees.

One word, “different.” I attended school for a semester before joining the military in 2002, which was eight months after September 11, 2001. Being young without ample motivation I did not fare well that semester of college in an automotive technology program in Jackson, Michigan. Returning to school was frightening since it was a place that was unfamiliar, and I had only lived in NYC for a year. Two months before coming back to school, I was laid off from a government contracting job at the Brooklyn Navy Yard where I worked on Marine Corps parachute systems. I connected with veterans at St. John’s University, who were organizing a student association and volunteered to help them. Ultimately, it was the student veterans’ organization that kept me grounded with academic life, and gave me a strong social support network.

The higher education setting doesn’t mesh well with the military mindset. College is a milieu of free flowing ideas and thoughts that are open to discussion and dissent at any given time. My view was still very authoritative and oligarchic until my professors taught me that everything is dynamic, and to exercise humanistic reasoning. In the military, you are trained not to think for yourself, but rather to think for the collective whole. I was able to shift my ideological perspective, which made it much easier for me to re-integrate into civilian life and left me with stronger conceptual skills.

Stay engaged in student activities that align with your interests. Then, connect with your school’s Student Veterans of America (SVA) chapter. They can be instrumental in returning to school and will guide you through the process. Seek out the veterans’ representative at your college and ask questions. My chief officer in the Navy would say, “Chuck, the answer is always ‘no’ unless you ask the question.” My advice is to keep your head up, and you can complete college even though the environment is vastly different from the military. It takes a little time to adjust, and once you do, it will become second nature similar to your military training. Lastly, build a support network of veterans and civilian students – no one achieves success alone.