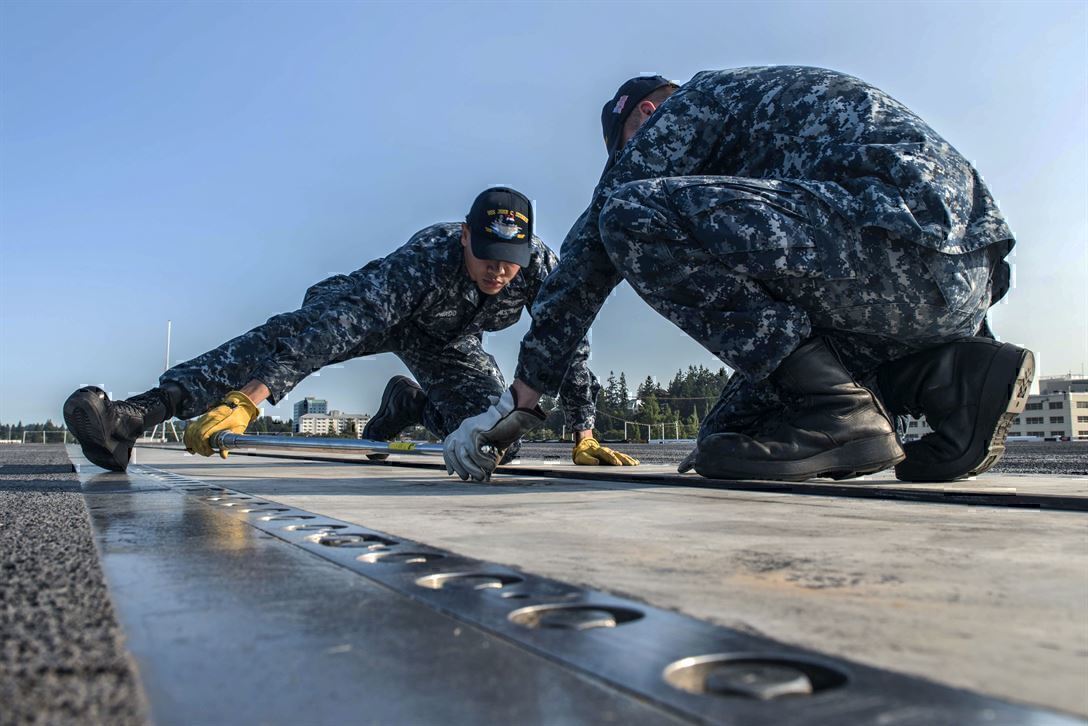 The Navy just released information to the fleet on the fielding of its new Navy Working Uniform Type III, the pixelated green, black and brown camouflage duds that look an awful lot like the Marine Corps’ MARPAT digital cammies.

This is the second camouflage uniform for the Navy in less than 10 years, and replaces the oft-mocked blue, black and grey “blueberries” deployed to the force in 2008 to the tune of $224 million.

The new Navy Type IIIs look pretty badass and come with all the whistles and bells of previous combat-style uniforms, including shoulder pockets, velcro tabs for all your merit badges and flags and a collar designed to protect against body armor chafing.

The camo pattern is a lighter green version of the Marine Corps forest MARPAT and, if you look closely, the have the Navy Anchor, Constitution and Eagle, or “ACE,” embedded in the pattern.

Notice the Anchor, Constitution and Eagle logo embedded in the pattern. (Photo from Wikimedia Commons)

There’s also a desert digital version that’ll be only for sailors operating in arid climes abroad. The new Navy Working Uniform Type III is set to be rolled out Navy wide Oct. 1 and will typically be worn by sailors at home stations.

While the new green digital Type IIIs look a darn sight better than the Type I “blueberries,” they trace their lineage to some of America’s most elite warriors. Now all sailors can have a little of the “operator” spring in their step thanks to their brother frogmen.

In the mid-2000s, as special operations forces were fighting pitched battles against al Qaeda terrorists worldwide, Naval Special Warfare operators were refining their kit to better suit the environments they were fighting in.

About the time Army Special Forces and Rangers cast their gaze at Crye Precision’s MultiCam pattern, sailors in SEAL Team 6 were testing out a modified version of the Corps’ MARPAT.

What came out of the battlefield research were two patterns dubbed AOR1 and AOR2. AOR1 was a slightly darker version of the Corps’ desert digital pattern but ran more vertically than horizontal, and AOR2 was a brighter green-hued woodland MARPAT, perfect for SEAL operations in places like the Philippines where they were hunting al Qaeda affiliates.

The uniform was the exclusive province of Naval Special Warfare operators for several years, who wore tactical duds in those patterns manufactured by outside vendors like Beyond Clothing.

They didn’t become standard Navy issue until 2010, when the service opted to field the AOR2-patterned uniforms to “expeditionary” sailors — typically Seabees, EOD technicians, riverine troops and others who operate closely with ground-based forces overseas.

Interestingly, at the time the Navy precluded sailors other than SEALs from wearing the desert AOR1 pattern, opting instead to keep sailors in the desert wearing the old tri-color analog pattern.

Fast forward to 2016 and the service announced it would field the DevGru-approved AOR2/Type III green-camo uniforms across the force, casting the cartoonish blue Type I patterned uniforms to the dustbin of history.

Guess now there’s another reason to buy that SEAL a drink.

This article was written by Christian Lowe and originally appeared on WeAreTheMighty.com