The Army plans to issue a new World War II-style uniform starting the summer of 2020, as senior leaders look to sharpen the professional appearance of soldiers and inspire others to join them.

The Army Greens uniform, a version of the uniform once worn by the Greatest Generation, will now be worn by today’s generation as they lead the service into the future.

“As I go around and talk to soldiers… they’re very excited about it,” said Sgt. Maj. of the Army Daniel A. Dailey. “They’re excited for the same reasons why we wanted to do this. This uniform is very much still in the minds of many Americans.”

The Army Service Uniform will revert to a dress uniform for more formal events, while the Operational Camouflage Pattern uniform will still be used as a duty uniform.

The Army does not plan to get rid of the ASU or have soldiers wear the Army Greens uniform in the motor pool, Dailey said Nov. 19, 2018, during a media roundtable at the Pentagon.

A pair of soldier demonstrators wear prototypes of the Army Greens uniform.

(US Army photo by Ron Lee)

Ultimately, it will be up to the unit commander what soldiers will wear.

“It’s going to be a commander’s call,” said Brig. Gen. Anthony Potts, who is in charge of PEO Soldier, the lead developer of the uniform. “Each commander out there will have the opportunity to determine what the uniform is going to be.”

The Greens uniform, Potts said, will provide a better option to soldiers who work in an office or in public areas.

“What we found is that the ASU itself doesn’t really dress down well to a service uniform with a white shirt and stripes on the pants,” the general said Friday in a separate interview.

In the summer of 2020, fielding is expected to start with soldiers arriving to their first duty assignments. The uniform will also be available for soldiers to purchase at that time. The mandatory wear date for all soldiers is set for 2028.

The new uniform will be cost-neutral for enlisted soldiers, who will be able to purchase it with their clothing allowance.

Before any of that, the Greens uniform will begin a limited user evaluation within 90 days to help finalize the design of the uniform.

The first uniforms will go out to about 200 soldiers, mainly recruiters, who interact with the public on a daily basis.

“Every time you design a new uniform, the devil is in the details,” Potts said.

PEO Soldier teams will then go out and conduct surveys and analysis with those wearing the uniform.

“What that does is that helps us fix or correct any of the design patterns that need to be corrected,” he said, “or any potential quality problems you might see with some of the first runs of new materials.”

PEO Soldier worked with design teams at the Army Natick Soldier Research, Development and Engineering Center to modernize the WWII-era uniform. Some of the updates make the uniform more durable and comfortable, he said.

“There will be differences,” Potts said. “Differences in materials, slight differences in design, but keeping the authentic feel of that time period and that original uniform.”

The Army Uniform Board, part of the Army G-4 office, also sought and addressed feedback from the service’s first all-female uniform board.

One approved change the female board recommended was the slacks and low-quarter dress shoes instead of the skirt and pumps for female soldiers.

“It was a more comfortable uniform for them during the day,” Potts said of what he had heard from female demonstrators who have worn the uniform. “And they really felt like it was a very sharp uniform that they were proud to wear.”

While the uniform is issued with an all-weather coat, there will be optional jackets for soldiers to purchase and wear.

An Eisenhower or “Ike” waist-length jacket will be available as well as a green-colored tanker jacket and a leather bomber jacket.

Options for headgear will include the garrison cap and the beret, both of which will be issued. Soldiers will also have the option to purchase a service cap.

For soldiers who do wear the uniform, they will help honor those who came before them. 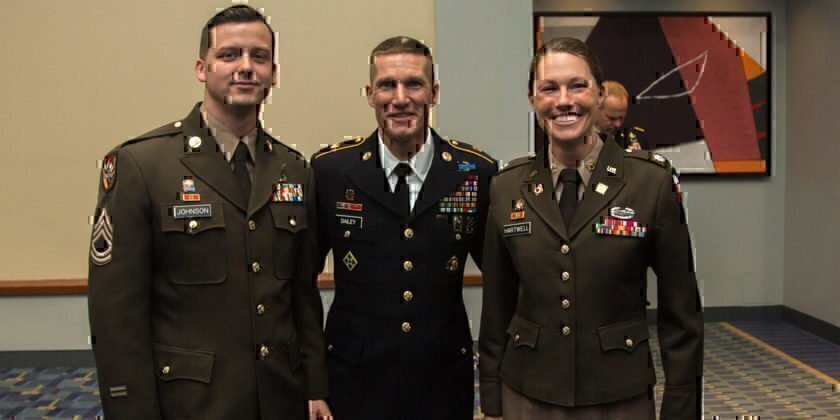 “This nation came together during World War II and fought and won a great war,” Dailey said. “And that’s what the secretary and the chief want to do, is capitalize on that Greatest Generation, because there’s another great generation that is serving today and that’s the soldiers who serve in the United States Army.”

This article originally appeared on the United States Army.