The grassy hill surrounding the arena is packed full of spectators and family members. The emcee calls out a dancer’s name; there’s movement in the crowd. The competitor makes it into the arena, throws out his hoops for his sequence.

Upon the dancer’s cue, the drum starts singing. Bells on his ankles sing in time with each beat of the drum and each step he makes.

He has five minutes to convey a story, using small hoops as his medium to paint each scene, as part of the 28th Annual Heard Museum World Championship Hoop Dance Contest held in Phoenix earlier this year.

“The competition opens everyone’s eyes to the Native American culture,” said Timothy Clouser, the museum’s facilities director and a Navy veteran. “I find it very fascinating how each dancer puts their own artistic expression in their dance and story they are trying to convey. Not one dance is the same.”

Brian Hammill, an Army veteran of the Ho-Chunk Nation of Wisconsin and a previous World Hoop Dance champion, competed in Phoenix. He uses his dancing to help bridge the cultural gap between Native Americans and non-natives, sharing his culture everywhere he goes. 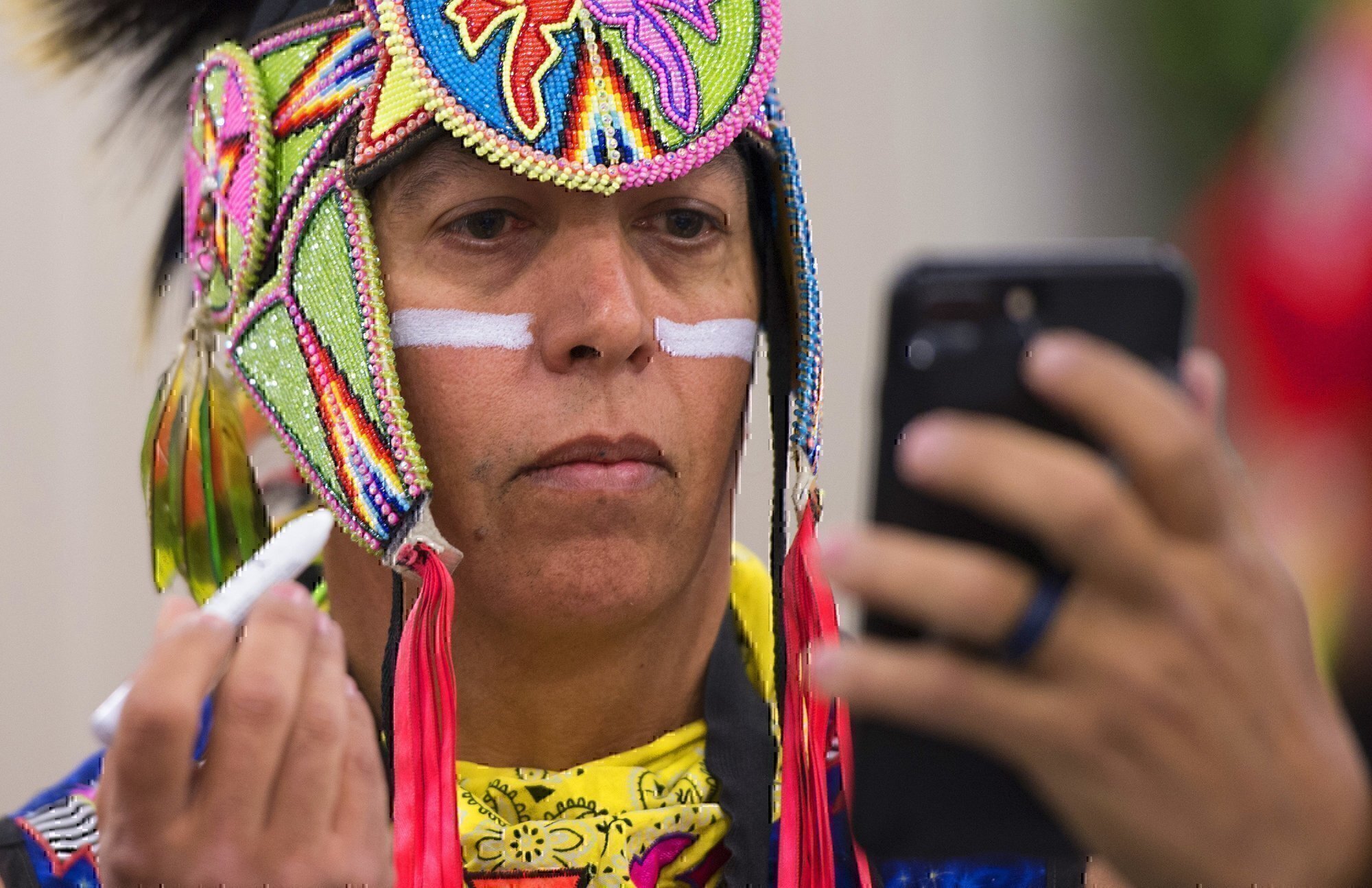 The hoop dance is different than other Native American dances, such as powwow dancing. Powwows are inter-tribal celebrations of Native American culture. Tribal affiliation doesn’t matter, nor does what region someone is from. It doesn’t even matter if someone is native or non-native.

The hoop dance regalia is minimal compared to that of the powwow dances. Typically, a hoop dancer will wear a shirt, breechcloth, side drops, sheep skin, bells (or deer hooves) and moccasins. The colors and designs are specific to each person. The hoops are small and vary in size, typically depending on the height of the dancer. Sometimes they have designs on them, again, specific to each dancer.

“Traditionally, the hoops were made out of willow, depending on where the tribe was located,” Hammill said. “I make mine out of a very exotic wood called plastic.”

The hoop dance has different origin stories with a common thread that it originated in the Southwest. To some native nations, the hoop dance is a healing dance, Hammill said. A hoop would traditionally be passed over an afflicted person, then the dancer would break that hoop and never use it again.

“Basically, it was a way of taking away all that pain or sickness away,” Hammill said. “That’s not done in public. There is also a story of the children, the Taos Pueblo children. It is said that the children saw this ceremony taking place and began to emulate what they saw. Instead of telling the kids, ‘No, you can’t do this,’ the adults encouraged them. They began to sing songs for them. They took what was a prayer and made it something the kids could do. So, basically, the dance changed, it evolved.

“In the north, it tells of a warrior’s journey,” he continued. “As you see these hoops come together, they start to make formations. You’ll see the eagle, the butterfly, the warrior on the battlefield defending his family, the clouds in the sky.”

Each person, he explained, will see that dance in a different way, interpret the story differently. There are hundreds of hoop dance stories, but each one revolves around the sacred circle of life.

“The significance of the hoops is that it represents the circle of life. There’s no beginning and no ending,” Hammill said. “We are taught that each and every one of us — doesn’t matter who we are, where we come from, the color of our skin — we are all created equal in that sacred hoop.”

Another part of Hammill’s culture that he lives every day is the tradition of service.

“The way I was always taught is, as a native person, we are always here to serve the people,” he said. 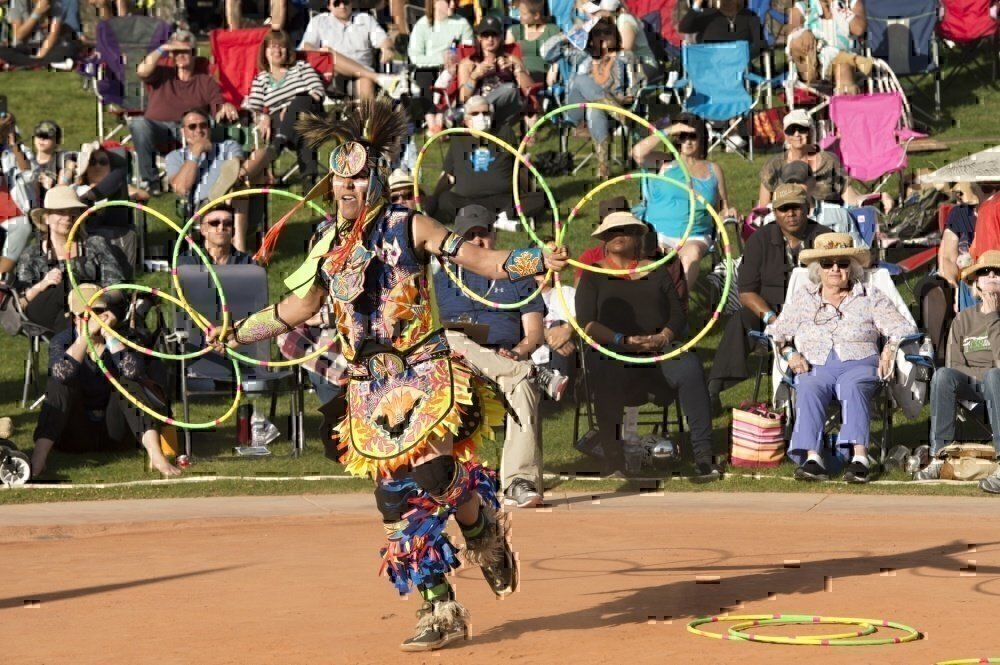 “We serve them by cooking and providing food for them. We teach them, or protect them. One of the greatest things I was always taught that we do, is we put ourselves in harm’s way to protect our families and our identity. It was something I’ve always wanted to do, I felt I needed to do.”

Hammill enlisted in the Army while still in high school. He went to basic training during the summer between his junior and senior years, and went on active duty after graduation.

“It’s just something that we do,” he said. “You’ll find that throughout the United States, there are a higher percentage of native veterans per capita than any other race.”

While he was stationed in South Korea, one of his first sergeants learned that he had danced while growing up, and asked Hammill to share his culture with everyone. He performed the men’s fancy dance for his fellow Soldiers.

“A lot of these Soldiers weren’t exposed to different cultures, so he had me do one of my first presentations there,” he said. “I called my dad in Wisconsin, and he shipped all of my dance regalia to me. I started doing presentations for the people I was stationed with, and in different areas throughout the Korean theater. That’s where I really got the passion to share the story, and I found out how important it is.”

Hammill was introduced to the hoop dance prior to his transition out of the military in 1994. Back then, he would travel about 120 miles from Fort Polk, Louisiana, to Livingston, Texas, where he performed and danced with the Alabama-Coushatta tribe.

“A good friend of mine, Gillman Abbey, basically gave me this hoop dance,” he said. “He told me the story. He told me every time I dance, to always make sure I share the story, and give the dance.”

He said the hoop dance helped him heal from his time in service. Still brand new to hoop dancing, Hammill actually competed in the World Hoop Dance Championship for the first time about six months after he got out of the military.

“I was 24, in the adult division,” he said. “I remember I was scared because this is a huge competition. Some of the dancers I’m still dancing with today pulled me aside, said to me, ‘Hey, you’re doing good. Let me show you some different moves. Let me help you.’ I’ll never forget that because that’s what really kept me coming back. Being here, feeling that hoop and how it affects people, it keeps me coming back. It took me a long time, about 15 years, until I won my first world title. I moved to the senior division and won four more. But it’s a family. It really is something we all have in common.”

READ NEXT: HERE’S WHAT TO EXPECT FROM THE ARMY’S NEW GREENS

READ NEXT: WHY THE SCREAMING EAGLES STILL ROCK AN AIRBORNE TAB