This is How the ‘Missing Man’ Formation Honors Fallen Pilots 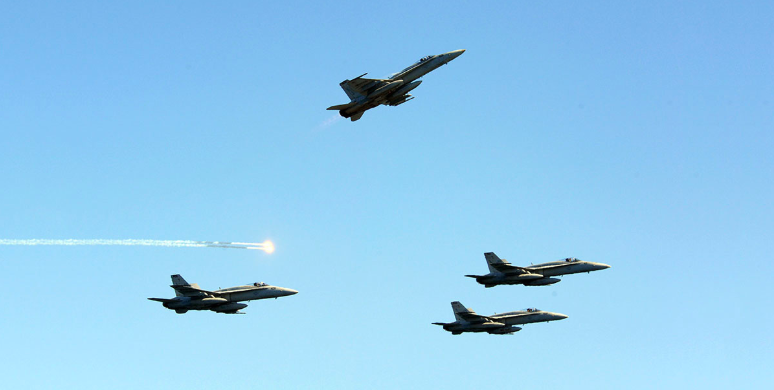 The first time I witnessed a ‘missing man formation’ was at the funeral of my grandfather, who flew the B-25 Mitchell during World War II. After his service in the Army Air Corps, he became a commercial pilot for TWA and then ventured into private flight. He died in an airplane crash at the age of 74 and my family gathered with his aviation community at Santa Paula Airport for his memorial.

At the ceremony, we looked to the sky as a group of planes from the Condor Squadron flew overhead. One of the planes banked away, leaving an empty space in the formation.

The symbolism was not lost on me.

READ NEXT: 4 FACTS YOU DIDN’T KNOW ABOUT ROMAN GLADIATORS

It’s a powerful visual, and a traditional salute to military aviators.

The “missing man formation” has evolved throughout history, but today, there are two main variations.

The first is the one held at my grandfather’s memorial: a group of planes roars low overhead, then one pulls up spectacularly from the rest, leaving his or her space in the formation empty to represent the fallen pilot.

In the second, the flight takes off entirely without the missing pilot — this formation is less common. Depending on the flight, the pilot’s actual space where he would have flown may be left empty; otherwise, it is most common for the ‘missing man’ to fly the second element leader’s position, whether in a finger-four formation (a “V” with the left leg longer than the right) or, as the Thunderbirds perform it in the video below, a six-aircraft flight.

Also read: This is how the military conducts a ‘death notification’

The “missing man formation” has always held a special place in my heart, perhaps because flight, for me, feels synonymous with freedom. The notion that a pilot might slip “the surly bonds of earth” for the final time is one that brings me comfort, and therefore saying goodbye to those who love the “vastness of the sky” in this way is a bittersweet moment.

Watch the video below to see a “missing man formation” in action: