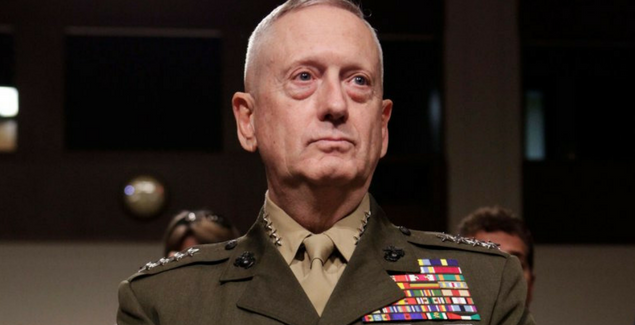 A lot of accomplishments in the military get overlooked or rewarded with a couple metal baubles to be worn on the chest.

But sometimes, a man leads a couple of invasions and gets to keep his callsign for the rest of his life as a nickname, or someone leaves their job as a respected religious leader to become a major general known as “The Fighting Bishop.” Here are nine awesome nicknames bestowed on military badasses:

While many more people know retired Marine Corps general and current U.S. Secretary of Defense Jim Mattis as “Mad Dog,” that nickname was actually foisted upon him by the press, and he apparently doesn’t like it.

His nickname among his men was his callsign, “Chaos.”

Navy Adm. Arleigh Burke — yeah, the guy those destroyers are named after — was ordered to shut down a major Japanese troop transfer near the end of the Solomon Islands Campaign. But Burke’s ships were in need of repair and the convoy couldn’t attempt to move at its top speed, 38 knots.

So Burke’s commander sent him orders that began, “THIRTY-ONE KNOT BURKE GET …” and Burke readily agreed, pushing his convoy task force to 31 knots and getting to the Japanese evacuation just in time to launch a skilled attack on Thanksgiving morning that sank three of the five Japanese ships.

The story of Leonidas Polk‘s nickname is pretty simple. He attended West Point, left the military for religious life, became a bishop, and then returned to the military as a Confederate general in the Civil War.

He was a bishop who fought in a war, and his men started calling him “The Fighting Bishop.”

Union Gen. George Crook was a bottom-of-his-class West Point graduate who distinguished himself in the Civil War and Indian Wars. It was during the Indian Wars that the Apache gave Crook the nickname “Nantan Lupan,” which translates to Grey Wolf.

American Eugene Bullard emigrated to France just before Germany invaded it. He joined the French Foreign Legion and became in infantry hero before an injury ended his ground combat time. So, he joined the French Escadrille and became a fighter pilot, possibly the first black one. He also served as a spy in World War II.

Oddly enough, Bullard’s nickname, “The Black Swallow of Death,” was bestowed for his prowess as an infantryman, not for his two aerial kills as a pilot.

Legendary Army officer Gen. George S. Patton, Jr., America’s first and possibly greatest tank officer, promised his junior leaders that World War II would be full of grisly horror. He told them, “You will be up to your neck in blood and guts.” The men decided that was the perfect nickname for him.

British Pvt. Edwin Hughes had a pretty unfortunate nickname. He was one of the cavalrymen who took part in the ill-fated Charge of the Light Brigade in 1854. That famous charge took place in the Battle of Balaclava, and Hughes’ “friends” apparently thought he would want a constant reminder of the day that all of his friends died, because they gave him the nickname “Balaclava Ned.”

Sir Douglas Haig was the British Field Marshal in World War I, commanding the entire British Expeditionary Force. He was well-regarded by the British public immediately after the war, but there were lingering questions about whether his offensive tactics led to too many British casualties.

At the Battle of the Somme, the severe British losses led to Haig being dubbed “The Butcher of the Somme.”

Joe Stilwell was one of America’s greatest generals in the 20th Century, rated higher than famous names like Patton and Bradley in a pre-war survey of military leadership. And Stilwell had a reputation for a mouth that would’ve made Patton blush, lots of curse words and colorful insults. That led to his nickname, “Vinegar Joe,” referring to how caustic his tongue was.

Unfortunately for Stilwell, his skills with the Chinese language led to him losing command of the Africa invasion and getting a diplomatic mission to China instead. After the Chinese kicked him out a few years later, Stilwell was given command of the invasion of Japan, an invasion that never happened.

Wonder what Joe had to say about those two events?

>>>Continue Reading at We Are the Mighty!