The Janitor: A Story Of Heroism and Humility 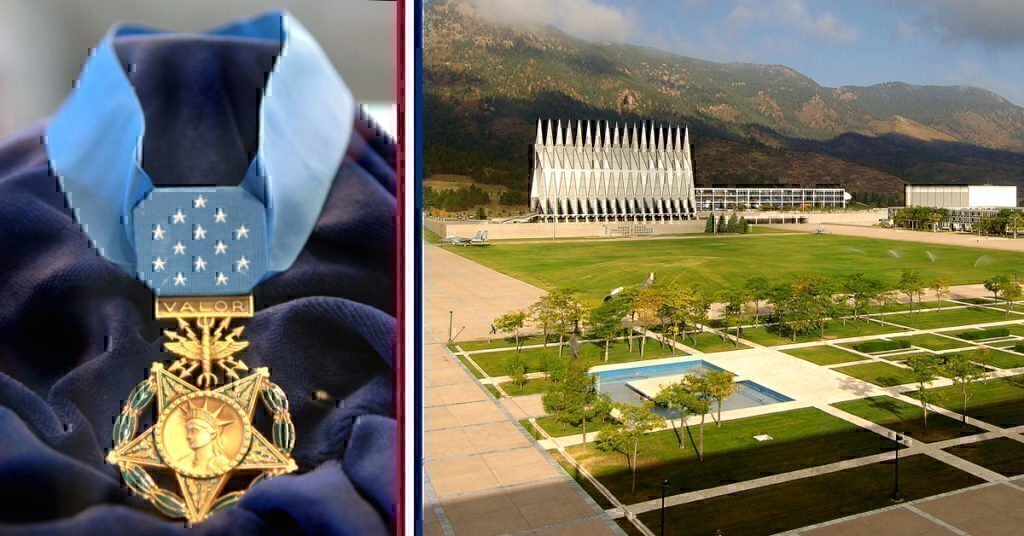 It’s not every day that the mild-mannered janitor at your school turns out to be a bad ass Medal of Honor recipient. But that was exactly the case for thousands of cadets at the United States Air Force Academy.

The story starts in Italy in 1943. Pvt. William Crawford was serving as a scout in I Company, 3rdBattalion, 142nd Infantry Regiment, 36th Infantry Division, as it fought its way up the Italian peninsula.

After landing at Salerno, Crawford’s unit was advancing against stiff German resistance. Just four days after the landings, I Company launched an attack against Hill 424. Once his platoon gained the crest, they became pinned down by intense German machine gun fire.

Ignoring the hail of bullets, Crawford advanced on the German position and silenced it with a hand grenade.

When his platoon was once again pinned down, Crawford didn’t hesitate to charge forward, this time to destroy two machine gun emplacements.

He first attacked the machine gun to the left and destroyed it and the crew with a hand grenade. He then worked his way to the next machine gun under intense fire. When he was in range he again tossed a hand grenade that sent the crew running.

He then manned their own machine gun and mowed down the retreating Germans, allowing his unit to continue the advance.

Crawford was recommended for the Medal of Honor for his bravery.

Later during the intense fighting in Italy, the Germans captured Crawford. His status was listed as missing, presumed dead.

The Medal of Honor is the highest military decoration awarded by the United States government. It is bestowed on a member of the United States armed forces who distinguishes himself “conspicuously by gallantry and intrepidity at the risk of his life above and beyond the call of duty while engaged in an action against an enemy of the United States.” Because of the nature of its criteria, the medal is often awarded posthumously.

When his Medal of Honor was approved in 1944, it was presented to his father, posthumously.

However, Crawford had in fact survived and in 1945 was liberated from a German POW camp by advancing Allied forces.

Crawford was discharged after the war and returned home before marrying in 1946. He decided to reenlist in 1947 and served another 20 years before retiring with the rank of Master Sergeant in 1967.

His next career move would prove fateful. He took a position as a janitor at the Air Force Academy in his home state of Colorado.

Despite his courage in combat, Crawford had always been rather mild-mannered and didn’t care much to talk about himself. As such, the cadets at the Academy paid him no mind, assuming he was just any other janitor.

Crawford carried on his duties until 1976 when one cadet, James Moschgat, noticed a picture in a history book about World War II.

Moschgat couldn’t believe what he was seeing and showed the picture to his roommate saying, “I think Bill our janitor is a recipient of the Medal of Honor.”

The next day Moschgat and his roommate confronted Crawford to ask if it was truly him that was talked about in the book. According to Moschgat’s account Crawford simply looked at the picture and replied, “Yep, that’s me.”

Astonished by what they had just learned, they quickly asked why he had never mentioned it before. Crawford’s reply once again showed his humility. He simply said, “That was one day in my life and it happened a long time ago.”

Word quickly spread around campus that there was a Medal of Honor recipient in their midst.

The story could have easily ended here with a known recipient of the Medal of Honor working as a janitor at the Air Force Academy. Most people would have never heard the story.

However, the cadets weren’t done.

They eventually found out that because of the circumstances, mainly that Crawford was a POW at the time, he had never had a formal ceremony to present him with his medal.

So, when the Class of 1984 reached graduation they invited Crawford as their special guest. And they had a special surprise in store for him. President Ronald Reagan was giving the commencement speech at the Academy that year.

After his commencement speech President Reagan gave Crawford a long overdue honor and presented him with the Medal of Honor.

The encounter with Crawford had so touched Moschgat that he would later reflect on the event by writing an article titled “Leadership and the Janitor” for the USO magazine On Patrol.

In the article he details ten important lessons about leadership that he learned from his meeting of Bill Crawford.

Moschgat retired from the Air Force as a Colonel. Crawford lived out his days in Colorado where he was also famous for being one of four Medal of Honor recipients from the small town of Pueblo, CO.

This story was written by James Elphick and originally appeared on WeAreTheMighty.com