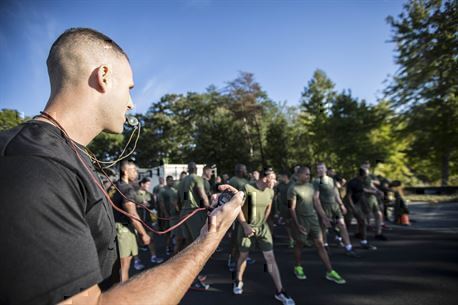 The competition brings together the top male and female Marines from each Marine Corps installation in a demanding competition of military function and fitness and to promote the advanced dynamics found in the High Intensity Tactical Training program.

The competition brings together the top male and female Marines from each Marine Corps installation in a demanding competition of military functional fitness and to promote the advanced dynamics found in the High Intensity Tactical Training program. 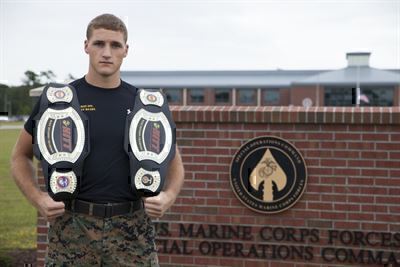 Mawhinney participated in the first competition in 2015, only a few months after completing the HITT Level 1 Instructor Course. He was still new to the HITT program and didn’t know what to expect when arriving at the competition. He attributed his sixth place finish to his lack of knowledge and proper preparation.

“I wasn’t really prepared for what the competition consisted of,” Mawhinney said. “I was still pretty new and didn’t have the knowledge to really succeed in the competition yet.”

Unsatisfied with the results, Mawhinney used his knowledge of the competition and HITT program to overhaul his workout routine and prepare for the 2016 competition. He did three-a-day workouts consisting of sprints and distance running along with HITT workouts, seeking to break himself down before building his body back up.

While some competitors only start preparing a few months prior to the event, Mawhinney starts preparing after a short break of one to two weeks following the previous competition. Around June, Mawhinney said he ramped up his workout routine and focused on workouts meant to get ready for the competition.

He took first place in 2016, proving his hard work had paid off. Despite the win, Mawhinney felt the pressure of a narrow point gap between his final standing and that of the second place finisher.

After the 2016 competition, Mawhinney checked into MARSOC where he leaned on the physical trainers at the MARSOC Performance and Resiliency program to help fine tune his workout program.

The PERRES trainers helped him adjust his training to consist of more explosive workouts, emphasizing heavy lifting versus faster, light-weight lifting and calisthenics.

His workouts also consisted of drills involving box jumps, modified explosive push-ups, and Olympic-style lifting. Mawhinney significantly trained his anaerobic threshold to increase his stamina for events. He stated that the typical human threshold tends to be around two minutes, but the events at the competition are around four to six minutes.

Because the scoring system is based off the time it takes to complete an event, Mawhinney said he didn’t want to lose points by pacing himself throughout the events. Instead, he focused his energy into one daily workout after noticing an increase in injuries resulting from the intense frequency of workouts the previous year.

His revamped program featured longer, more intense and harder workouts versus the shorter, easier ones from previous years. Mawhinney added in a second daily workout during the final stretch before the competition.

“The biggest thing we changed with this year’s workouts was increasing his speed and power versus volume,” said Alli Clauss, a MARSOC PERRES strength and conditioning coach. “Every workout we did had a point behind it.”

“[Looking back at my performance] there wasn’t any one thing that I thought I really wanted to work on,” said Mawhinney after this year’s competition. “I just want to get better at everything for next year.”

Along with increasing physical fitness, Mawhinney said the competition and the discipline required to train for such an event really bring together some of the best and physically fit Marines.

One of the biggest enjoyments for him was the atmosphere provided by those Marines. Mawhinney commented that for him it’s not about lifting and working out to look good, but to be the best Marine he can be an opportunity provided by the Tactical Athlete Competition.

“I’ve heard it said that we should work out for two reasons: to make ourselves better at killing the enemy and to make ourselves harder for the enemy to kill,” Mawhinney said. “I think that really matches with what the HITT program does in having that tactical athlete mindset.”

This story originally appeared on The Department of Defense Website

READ NEXT: NEW ARMY FITNESS TEST COULD BE IMPLEMENTED NEXT YEAR