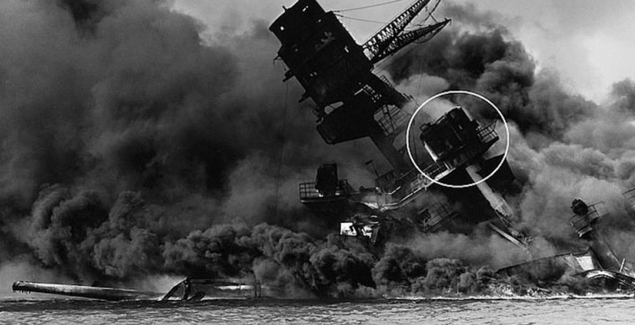 When Donald Stratton talks about his fateful day aboard the USS Arizona on Dec. 7, 1941, he often sums up the experience with: “Everybody had to be some place. We were there.”

That’s how the 94-year-old survivor explains the incomprehensible to the generations born in the 75 years since the Japanese attack on Pearl Harbor. It’s how he can comprehend an inferno that killed 1,177 fellow sailors and Marines aboard the Arizona and yet left him alive, though burned over two-thirds of his body.

He’s equally laconic in explaining why, after spending nearly a year in hospitals recovering from severe burns, he would rejoin the Navy and head off to war.

“All my buddies were in the service, so I just went back in,” Stratton said during a recent phone interview from his Colorado Springs home, where he lives with his wife of 66 years, Velma.

Stratton is one of five Arizona survivors still alive, and he expects to attend the 75th anniversary ceremonies this year, likely for the last time, he said.

“Well, it probably wouldn’t be the last one I want to attend, but I’m 94 years old so I don’t know how much more the good Lord’s got for me, you know?” he said.

Raised in the small Nebraska town of Red Cloud, Stratton joined the Navy in autumn 1940 after first considering enlisting in the Army as his father did when he was young. But after thinking about “the long marches and crawling through the mud, cruising the high seas on the deck of a ship seemed the better alternative,” Stratton wrote in his newly published memoir “All the Gallant Men,” coauthored by Ken Gire.

Within a couple months, he was aboard the Arizona, whose roughly 1,500-man crew rivaled the population of his hometown.

Stratton became aware of the aerial attack the morning of Dec. 7 when he stepped onto an outside deck carrying his sailor’s cap full of oranges. The fruit tumbled down as he saw and heard bombs dropping on Ford Island, the berthing point for the eight massive warships of Battleship Row: the California, Maryland, Nevada, Oklahoma, Pennsylvania, Tennessee, West Virginia and Arizona.

Scurrying to his battle station, Stratton saw a Japanese Zero strafe the Arizona’s deck and then fly past him so low that “I could see the pilot in his leather helmet and goggles taunting me with a smirk and a wave as he passed,” he wrote.

The men of the Arizona recognized they were “sitting ducks,” because the dive bombers were too low for ship’s guns to hit and the horizontal bombers were out of range. Sailing away was impossible; it would take more than two hours for the boilers to fire up.

“Men stumbled around on the deck like human torches, each collapsing into a flaming pile of flesh,” Stratton wrote. “Others jumped into the water. When they did, you could hear them sizzle.

“Up where we were, there was no one directing us, no way of escape, and no hope.

“My T-shirt had caught fire, burning my arms and my back. My legs were burned from my ankles to my thighs. My face was seared. The hair on my head had been singed off, and part of my ear was gone.”

Stratton and the handful of sailors gathered with him quite probably would have died in the next fiery minutes had a breeze not cleared the black smoke, revealing sailor Joe George standing on the nearby repair ship Vestal. He was busily following orders to cut the ropes that tethered the small ship to the Arizona.

They yelled to George — “perhaps the strongest man in the harbor, an All-Navy boxer” with a penchant for drunken brawls — to stop cutting and throw them a line, he wrote.

“He was the only man with a prayer of getting that line to us – if he couldn’t do it, then it was impossible. The reality started to sink in we were going to burn alive.”

On his third try, George threw the line “across flames, smoke and carnage.

“We had to go hand over hand on that line, and that was probably 70 or 80 feet,” Stratton said. “You know, you get to the middle of the line and it starts uphill again. That was really tough, with my hands and everything burned.”

As he was transported to a hospital, Stratton looked back at the smoke billowing up from the Arizona and the rest of the devastated fleet.

“At that moment, I knew I had lost a part of myself in the ruins of that ship, and a big part of my family in the men who died there,” he wrote. “I turned my head.”

What lay ahead was hardly a relief.

The overwhelmed hospital staff had to bypass serious injuries to treat even more grievous wounds.

“They put me on my stomach because my back was burned,” he said. “They left me there the rest of that day and all night. It was terrible. When they got me up the next morning, I was just like a board.”

Asked about his thoughts that long, long night, Stratton said, “I knew I wasn’t going to die, it seemed like.”

The first days there remain hazy, but he recalls well the maggots that a doctor used to eat away the dead and diseased tissue from his burns. They were used only once, Stratton wrote, “but it’s the kind of thing you tend not to forget.”

On Dec. 19, he and other injured were transported to a hospital specializing in burn treatment on Mare Island near San Francisco.

He slowly began to heal, but his left arm and leg lagged behind. A doctor advised amputation for the arm. Stratton refused.

He was medically discharged from the Navy in September 1942.

He settled into what he thought would be the rest of his life at Red Cloud, working at a tavern his father owned. But in a short while, he came to realize that with the Pearl Harbor attack, “everything innocent and trusting and carefree” had been torn out of him. He wanted back into the Navy.

He convinced an Omaha draft board in February 1944 to let him re-enlist, but given his severe injuries, he was required to repeat basic training. Despite his own doubts that his still-healing body could cope with the rigors, he completed the training and was assigned to the destroyer USS Stack, which stopped at Pearl Harbor on its way to the Pacific war.

Stratton could barely suppress his emotions as the ship passed by the Arizona, whose superstructure had already been hacked off, leaving the ship’s sunken skeleton that today is part of the USS Arizona Memorial.

The Stack’s captain mustered an all-hands call on the fantail and presented a Purple Heart to the surprised Stratton.

Stratton would sail on to action in New Guinea, the Philippines and Okinawa, but it was those moments gliding past the Arizona that served as healing balm to his seared soul.

“Though I may have left Pearl Harbor on a stretcher, I had returned on a destroyer,” Stratton wrote. “I had recovered my strength, as had my country.”

Continue reading at Stars and Stripes!