The Intel on Linemen 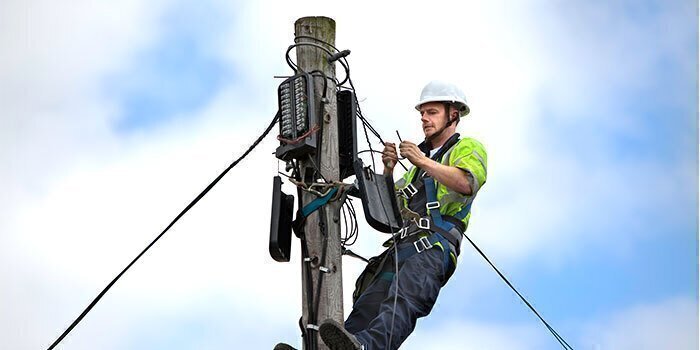 What is a utility worker? The term covers a wide array of jobs, from electric linemen to water line workers and welders to customer service agents at utility offices. Utility workers are responsible for our electric poles and our water mains, but they are also employed by companies such as Amtrak, where linemen maintain the electricity for the tracks, and Exxon, where welders and engineers build pretty much everything. Most jobs, however, are found in the energy industry.

According to Jeannice Hall, a spokeswoman with Southern Company, roughly 10 percent of the electric producer’s employees are military veterans. Compared to how many U.S. citizens serve in the military, less than 1 percent, it would seem that an employee population with veterans making up 10 percent is significant.

Of the wide range of jobs available at a number of these companies, lineman seems to be a perfect fit for military veterans. A lineman is basically the utility worker who climbs power poles and works on electric wires.

No matter which approach one takes to becoming a lineman, a great deal of training must happen. While a college degree is not required, an understanding of math is. Having studied the basics of electricity and understanding how simple electrical systems work will definitely give one an advantage over the average job seeker.

Whether you have a high school diploma or an undergraduate degree, an apprenticeship is required. The best way to get an apprenticeship is to apply for one through the National Joint Apprenticeship and Training Committee (NJATC), a non-profit founded in 1941 by the International Brotherhood of Electrical Workers and the National Electrical Contractors Association. The idea behind the NJATC was to design a curriculum and training program to produce the best-trained linemen possible. An apprenticeship through NJATC lasts between 3½ and four years, and is paid. After completion, the apprentice is officially a lineman. NJATC boasts more than 200 Joint Apprenticeship and Training Committees (JATC) around the country.

Alternatively, someone seeking to become a lineman may enroll in a line college. A line college is essentially a trade school, sometimes run by power companies jointly with junior colleges, other times as private, for-profit institutions. The costs for both options vary greatly. Upon completion of line college, a graduate would have to submit applications and resumes to his or her desired companies, many of which prefer to hire their apprentices.

Why is a career as a lineman ideal for a military veteran? Veterans are trained to live in a fast-paced, high-stress environment where it is imperative that they retain all of their training to succeed in any one single mission, all the while working as a team. This is difficult to recreate in other professions, excluding police officers and other emergency personnel, and it is the single greatest reason why military veterans make ideal candidates to become linemen.

Additionally, veterans are acutely aware of their surroundings, which is imperative to maintaining safety on the job. Though being a lineman is considered a dangerous job, safety is of the utmost concern to all companies that employ linemen. According to the U.S. Department of Labor’s Bureau of Labor Statistics (BLS), the number of deaths in the “power and communication line and related structures construction” industry in 2012 was 28. That’s 0.6 percent of industry-related deaths in every industry in the U.S. Of those 28, 10 were related to transportation incidents, four were due to falls or slips, 11 were due to exposure to harmful substances or environments, and only three were due to contact with objects or equipment. By comparison, residential construction workers saw 89 industry related deaths, loggers saw 61, and cattle ranchers had 117.

Just as important as income is location. Lineman jobs can be found nearly anywhere, and the BLS says the demand for them is only growing. More specifically, the demand for lineman is predicted to grow between 6 and 9 percent by 2022.

So where should I live to start my apprenticeship? Looking at the annual Military Friendly Employers edition of G.I. Jobs, one can almost take his or her pick.

Ameren reports its top geographic areas for hiring in 2014 are St. Louis, Fulton and Labadie in Missouri, and Peoria and Belleville in Illinois. Dominion lists Richmond, Fairfax and Norfolk, all in Virginian, along with Cleveland, Ohio, and Waterford, Conn.

What’s your first step? Decide you want to do it. Then, start checking out the various companies where you want to live, and start contacting their military recruiters. And keep going until you’re a lineman.