Here’s How Trial by Combat Worked 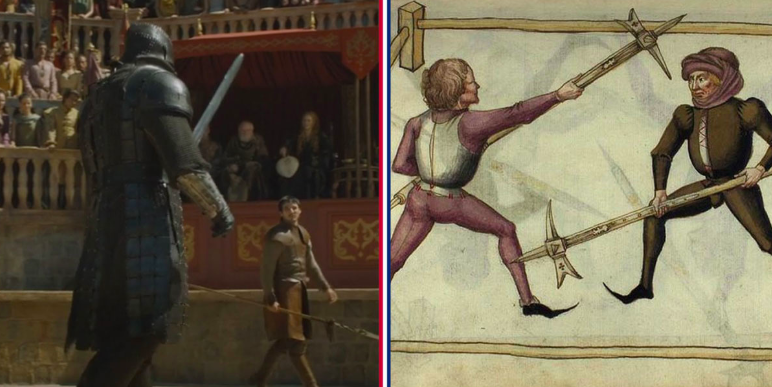 So, you got caught up in some legal action and you think you’re a tough enough fighter. You just saw that episode of Game of Thrones and decided, screw it — you want a trial by combat. While it’s still kind of technically legal in New York, it hasn’t ever been done. But if you want to be the first in a couple hundred years to have your fate decided in such a way, here’s how it works.

According to Medieval European law, a judicially sanctioned duel could take place to settle a disagreement in the absence of adequate evidence, a confession, or witnesses. It was mostly used to settle civil disputes and minor infringements. In Great Britain and Ireland, for example, you couldn’t use a trial by combat to appeal a murder charge.

I mean technically, if you killed someone and got a trial by combat, all you’d have to do is kill another person in front of a judge and then you’re free to go. Seems unproductive.

The logic behind a trial by combat is best explained by looking at a similar, not-really-fair-and-impartial system, trial by ordeal. This is, essentially, just like the witch-hunt scene in Monty Python and the Holy Grail (but with a much deeper religious connection). In brief, the accused are subjected to “an ordeal,” like having a hot iron pressed against their skin. If God was on their side, he’d send divine intervention to save the accused. In that specific scenario, if your skin burnt, you’re guilty. If not, you’re free.

The “ordeals” spanned the gamut of ridiculousness at the discretion of the judge. Another infamous example was the trial by water that was used on accused witches (sound familiar?). All an accused witch would have to do to earn freedom is sink and not have their skin burnt by the water.

Which isn’t that difficult if you exhale, stay calm, and not be thrown in acid.(Courtesy Photo)

A trial by combat was seen in the same way and generally used for things like land disputes in England. The two parties could settle on the location of a border between their lands in front of a judge and could either do the fighting themselves or request a champion. Each participant entered a sixty-foot-large square with a war hammer, a cudgel, a spear, and a shield. Knights could bring their own stuff, of course, which was much nicer.

Once the battle began, there was no stopping until one fighter was dead, disabled, or cried “Craven.” If the fight was stopped because of someone’s cowardice, they would immediately lose the trial and also be charged with outlawry. The winner of the combat got their way — after all, if God hadn’t wanted them to win, they wouldn’t have, right?

The trials were also said to have drawn in large crowds. Who wouldn’t want to see two farmers fight to the death over who owned a tree?(Courtesy Photo)

Historians can’t verify the last known trial by combat but the last certain judicial battle was in Scotland in 1597, when Adam Burntfield avenged his brother’s death.

READ NEXT: AMERICAN WWII PILOT WAS A HERO FOR SHOOTING DOWN A U.S. PLANE