How 9/11 Changed Their Military Service 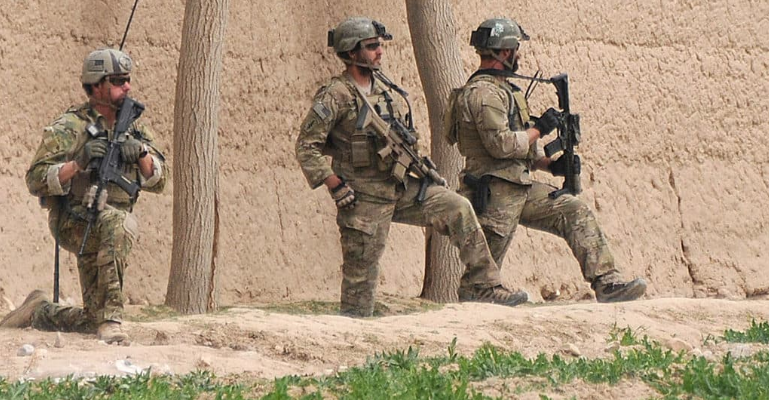 Chief Warrant Officer 3 Chris Shirron remembers he was several hours into a long convoy across the German autobahn when a military police officer leading the convoy pulled to the side of the road.

“What’s going on,” Shirron asked the soldier. “Why are we stopping?”

The soldier didn’t say much except that a plane had hit the World Trade Center.

“I was confused,” said Shirron, who was a sergeant at the time. “I asked, ‘What do you mean?’ I thought there must be a mistake.”

Plumes of smoke billow from the World Trade Center during the September 11 attacks. Photo from Flickr user Michael Foran.

The terrorist attacks that day — Sept. 11, 2001 — would change the course of Shirron’s career, and that of countless other troops, and have lasting implications for Fort Bragg and the military.

Almost immediately, Fort Bragg tightened security to its highest level. Training, typically a year-round affair, stopped. Instead, soldiers and airmen were readied to respond to the attacks.

The first soldiers would leave Fort Bragg in the weeks following the attacks. Since then, they have been continuously deployed to Afghanistan or Iraq as part of the Global War on Terror.

Shirron, stationed in Germany in 2001 with the 1st Infantry Division, said he didn’t fully learn what was happening until several hours after the attacks.

First, his convoy was turned around and ordered to report to the closest US military installation. When they arrived at Wurzburg, then the home of the 1st Infantry Division, they were greeted by soldiers in full body armor with loaded weapons.

The entire installation was on lockdown. Shirron and others were given space in an empty mailroom to rest and wait for orders.

Across the hall, he found about 40 soldiers gathered around a television, watching the news of the attacks in New York, Washington, and Pennsylvania

“Everything changed,” he said. “The Army gained a much greater purpose. And service became about something much greater than yourself.”

Shirron joined the Army in 1997, starting out in the Arkansas National Guard. He was a student at the University of Central Arkansas, still trying to figure out what he wanted to do with his life.

US Army Photo by Cherie A. Thurlby

In the Army, he found the purpose he was lacking. And less than a year later, he transferred to active duty as a fires support specialist.

“I liked what it taught me, not only about myself but about what the Army was,” Shirron said of his decision.

He served at Fort Campbell, Kentucky, before transferring to Germany.

In those years before the attacks, Shirron said, Army life was very different from what it was today.

“The worst part was that every six months or year, you were going to be gone for about 30 days for training,” he said. “That’s what everyone dreaded.”

Training was less urgent and more monotonous, he said. Soldiers prepared for “Russian hordes” and other threats that didn’t seem real.

But after the attacks, training changed.

It was more focused and efficient. There was an urgency, a realism that had lacked before.

“The tempo picked up,” Shirron said. “We were grasping a new type of warfighting. Leaders understood the gravity of the situation and our methods were changing.”

Those who once dreaded month-long exercises now recognized that deployments would become part of life. They would serve for a year or more in countries they knew little about prior to the attacks.

Shirron said that prospect didn’t scare many out of the force. Instead, it created new resolve.

“Now, training was real,” he said. “Now, deployments were eminent.”

Shirron was approaching the end of a three-year enlistment when 9/11 happened. He soon would re-enlist for a six-year tour.

He said he wanted to serve his country when he joined, fueled by patriotism and a sense of duty. Things were different for those who joined in the days and weeks after the attack.

“The soldiers that came in after 9/11 — they knew immediately that they were going to fight,” Shirron said. “They joined because of 9/11. They wanted to do their part.”

Others in the military today were too young to join in the wake of 9/11.

First Lt. Andrew Scholl, a member of the brigade staff for the 82nd Airborne Division Sustainment Brigade, was in fourth grade in Proctorville, Ohio, when the first plane hit the World Trade Center.

“I can remember there were some teachers being taken out of class and talked to in private,” Scholl said. “Next thing I knew, they came in and told us our parents would be picking us up.”

Scholl’s father arrived in full uniform. He was a lieutenant colonel serving as a professor of military science at Marshall University, and he did his best to explain to his son what had happened.

“It’s hard to wrap your head around that as a fourth-grader,” Scholl said.

Soon, his father was off to meetings at the Pentagon. Two deployments would follow — one for a year and another for six months.

Scholl said he never had thought much about serving in the military.

“Teachers would ask, ‘What do you want to do when you grow up?’ I never really had an answer before,” he said. “But after that day, it was ‘I want to be in the Army.’ Ever since that day, it’s all I wanted to do.”

“If anything, I think that shows what kind of people are joining today,” Scholl added. “It speaks volumes for their character.”

Shirron has deployed three times since the Sept. 11 terrorist attacks. He served 15 months and 14 months in Iraq, and 11 months in Afghanistan.

U.S. Soldiers conduct a patrol with Afghan National Army soldiers to check on conditions in a village in the Wardak province of Afghanistan Feb. 17, 2010. DoD photo by Sgt. Russell Gilchrest, U.S. Army

He said the Army has changed much over the last 16 years, but that focus is still there.

“We’ve been fighting in Iraq and Afghanistan for so long,” Shirron said. “But the burden on the individual soldier is only increasing.”

Today, the military juggles old and new threats, he said. There’s increased uncertainty in the Pacific, where North Korea continues to rattle sabers. And there’s budget uncertainty hanging over much of the force.

Shirron said he often looks back at how the Army and his own career was affected by Sept. 11.

This article was written by Drew Brooks for The Fayetteville Observer

WATCH NEXT: WATCH MATTIS GIVE TROOPS IN JORDAN A PEP TALK