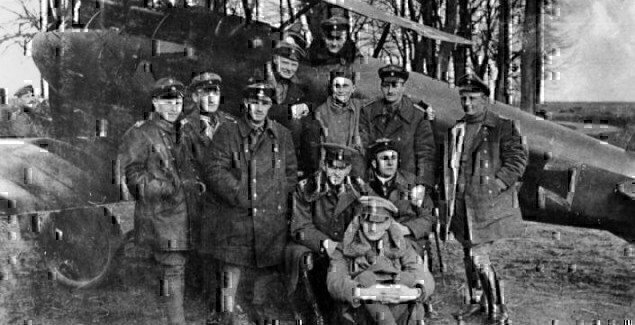 “The Red Baron” remains one of history’s most feared fighter pilots. At the dawn of aerial combat Manfred von Richtofen was credited with 80 kills, most of which were won in planes painted bright red.

Richtofen was born into German royalty as a freiherr, which is similar to an English baron. Manfred’s father was a military officer who was disappointed when his own career was cut short by injury and so pushed his son to succeed where he failed.

Manfred began training for the military at the age of 11 in a military school, the Cadet Institute at Wahlstatt. The boy who would become the baron was undisciplined and a barely passing student according to his autobiography. He was also prone to dangerous stunts:

I had a tremendous liking for all sorts of risky tricks. One fine day I climbed with my friend Frankenberg the famous steeple of Wahlstatt by means of the lightning conductor and tied my handkerchief to the top. I remember exactly how difficult it was to negotiate the gutters. Ten years later, when I visited my little brother at Wahlstatt, I saw my handkerchief still tied up high in the air.

While Richtofen wasn’t interested in the military and was a lackluster student, he was a gifted athlete and felt it was his duty to fulfill his father’s wishes. He graduated from the school and was commissioned as a cavalry officer in 1912. After the outbreak of World War I, Richtofen initially spent his time doing reconnaissance.

But as the armies dug into trenches around Paris, the need for cavalry waned and cavalry soldiers were reassigned to positions laying cable or acting as couriers. Some officers, including Richtofen, were told that they would be assigned quartermaster duty. Richtofen balked.

“I have not gone to war to collect cheese and eggs, but for another purpose,” he said.

So he applied to training as an observer on reconnaissance flights. His first training flight was a disaster. He lost his equipment and failed to keep track of his position or heading. But he rededicated himself to training and became a skilled observer. As the war ground on he decided to become a pilot. His ambition was bolstered when he met Lt. Oswald Boelcke, a famous fighter pilot.

He earned his pilot ‘s certificate on Christmas of 1915 and continued training. He was eventually selected by Boelcke to be in Boelcke’s new unit. On Sep. 17, 1916, Richtofen went on his first patrol and scored his first kill.

After that, his momentum built as he scored kill after kill. For each victory, he commissioned a silver cup with the type of the plane he shot down engraved on the bottom.

It wasn’t until late 1916 that Richtofen painted his aircraft red. By this time, he was an accomplished fighter ace with 9 confirmed kills. A number of nicknames cropped up after Richtofen adopted the trademark paint job, including “The Red Baron.”

In Jan. 1917 the baron reached 16 kills and was given command of Jagdestaffel 11. He and his men continued to fight the British and in Apr. Richtofen reached a new milestone, finally passing Boelcke’s record 40 kills. By the end of the month, Richtofen had 52 total victories.

But only a few months later, Rictofen was wounded in an air battle when a round struck him in the head. He was initially blinded but regained his sight in time to land the plane. After a forced convalescent leave, Richtofen demanded to return to the front.

Of course, through all of this, the Red Baron was achieving new aerial victories. They seem to have lost their allure for him though. After the shot to his head, he became angry and brooding, but continued to fight.

In April 1918, he doubled Boelcke’s record and achieved his 80th kill. But Death was tired of waiting for the baron. On Apr. 21, 1918, the day after his 80th victory, Richtofen was shot through the chest while aggressively chasing a rookie Canadian pilot. There is speculation that his defeat in Apr. 21 can be credited to the traumatic brain injury he sustained the summer before.

The Red Baron had been feared but also respected by his enemies and the Australian aviators of No. 3 Squadron gave him a military burial with full honors.

Also on We Are the Mighty:

Original Article can be found here.