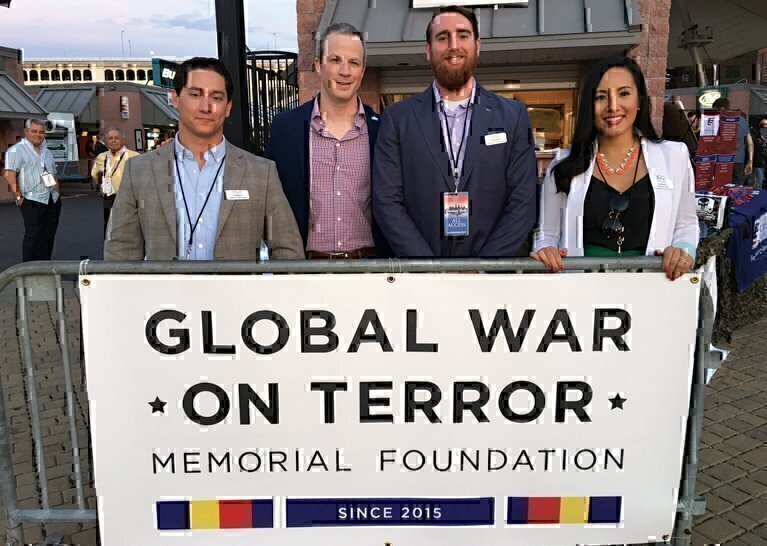 It took almost 60 years for America to honor the 16 million Americans who served in World War II with a national memorial in Washington, D.C. It took 42 years to complete a national monument to those who served in Korea.

Andrew Brennan, 31, is determined not to let that happen to the veterans who served – and still are serving – in the Global War on Terror. A former Army Blackhawk pilot who flew combat missions in Afghanistan, he is spearheading a campaign to build a national memorial to those who have served since Sept. 11 – even as Americans are still dying overseas.

“I don’t want the service members who fought in 2001 to never see their memorial,” Brennan says. “The WWII Memorial wasn’t dedicated until 59 years after the war. Sadly, many of them had passed already. You juxtapose that experience with the Vietnam generation that has experienced 30-plus years of group healing around their memorial. Seems to me that we have a valid model with the Vietnam experience … we should strive to rinse and repeat that.”

Brennan will tell you it all started with a blister. He felt lost after his Army service. The West Point graduate had landed a good job as a logistician, but moving boxes around a warehouse just wasn’t cutting it after flying missions in the most dangerous environment in world. After a year he quit his job, put all of his belongings in storage, and set out with five other veterans to hike the Continental Divide Trail.

Along the way, he got a blister on his foot that got infected. The infection got into his bloodstream, and Brennan wound up in a hospital in New Mexico fighting for his life against sepsis, a silent killer that claims hundreds of thousands of lives every year.

As Brennan recovered, a local Vietnam veteran who lived in Albuquerque offered to put him up for a few days, then give him a ride to meet the rest of his hiking buddies who had continued with the hike. In the meantime, the veteran invited Brennan to a lunch along the route of the “Run for the Wall” to serve more than 250 motorcycle-riding veterans traveling from Los Angeles to Washington, D.C., for “Rolling Thunder” on Memorial Day weekend.

He did, and it changed his life.

“I was overwhelmed by the camaraderie of the group. These were guys that had a tough fight in a jungle, and were largely treated like garbage by their countrymen when they came home from war, yet here they were 40 years later – the most gelled and cohesive group of veterans I’d ever seen. It literally made the hair on my arms stand up,” Brennan says. “I thought to myself, ‘These traditions all sprung up around their memorial. My generation needs this.’”

When he resumed his hike along the Continental Divide, Brennan had four months to chew on the idea.

When he returned, Brennan had a plan. In November 2014 he wrote a five-phase operations order, assembled a team and launched the Global War on Terror Memorial Foundation (GWOTMF). Their goal was to build a memorial on the National Mall in Washington, D.C., to honor the nation’s fallen warriors, service members and their families who served after Sept. 11, 2001. The foundation gained 501(c)3 status in May 2015.

One of those Brennan enlisted was Lisa Wong, a classmate at the University of Pittsburgh’s Joseph M. Katz Graduate School of Business and an Air Force officer. Brennan told her all about his initiative.

“While I grew up in the Washington, D.C., area often visiting the great war memorials, I never thought of this war as one of ‘those’ wars,” she says. “The more we spoke the more I came to realize this is the war of my generation. Almost everyone in our nation is affected by this war.”

In November 2015, Wong joined the board of directors and has been working ever since to make the memorial a reality.

“Close to seven thousand (and counting) Americans have perished in the GWOT, including over 20 United States Air Force Academy alumni (USAFA), one of my alma maters,” says Wong, who “walked the grounds of USAFA with six of them. Despite their physical presences being taken away, I truly believe those who gave the ultimate sacrifice did not die in vain. Their spirit and legacy lives on in their family and friends. So, to me, this memorial is more than just honoring the fallen, but also educating the public and inspiring hope for a better future.”

A month later, another GWOTMF board member approached Melissa Kim, a public relations executive and Marine Corps spouse whose husband deployed to Iraq in 2005 and 2009, to help with the campaign.

“I was immediately sold on the cause. I have grown up alongside this war within a military community deeply affected by it as both an Army brat and Marine Corps spouse,” Kim says. “So I understood what this memorial could do to both heal and honor our troops and our nation. I was touched that GWOTMF would extend the opportunity to me be a part of this historic endeavor.”

Kim takes point on getting the word out about the GWOTMF’s campaign, working with Brennan and the board of directors on media relations, developing press materials and managing the social media channels.

The foundation has also enlisted the help of some heavyweights to serve on its advisory board, including Gen. (Ret.) David H. Petraeus, Gen. (Ret.) George W. Casey, Jr., Team Rubicon co-founder and CEO Jake Wood, and Jan Scruggs, the Vietnam veteran who founded the Vietnam Veterans Memorial Fund.

Despite the enthusiastic responses, the foundation faces some serious challenges. They need an act of Congress. Literally. In 1986, Congress enacted the Commemorative Works Act, which dictates that no national war memorial can be built until at least 10 years after the end of hostilities. The Global War on Terror is still being waged, and may go on indefinitely. So GWOTMF leaders are lobbying Congress to amend the current 10-year restriction.

“We have been at war for 15 years now. When you do the math, that is 6.3 percent of our nation’s entire history,” Brennan says. “We’ve met the ‘historic significance’ burden 100 percent, and then some.”

In early September, two post-9/11 veterans who now serve in the U.S. House of Representatives introduced a bill that would exempt the GWOT memorial from the 1986 law. Reps. Ryan Zinke, R-Mont., a former Navy SEAL, and Seth Moulton, D-Mass., who both served in Iraq, submitted the bill.

The GWOTMF also has to convince Congress to amend a 2003 law that prohibits any more memorials from being built on the National Mall because it is considered a “completed work of art.” GWOTMF is considering two sites along the Potomac River.

Once the laws are amended and a site is chosen, a design competition would be held. Brennan believes 2024 is a realistic goal for the completion of the memorial.

“This war effort was a group effort,” he says. “Granted, a small group of our population, but we weathered that and will continue to. We can come together in the same fashion and get this done together. Our national leadership asked us to go downrange and do the impossible with constrained resources and limited to no guidance countless times. Let’s dust off that skill set we were all forced to grow in the tax- free zone and let’s leverage it on this.”

Here’s how you can help: