The First Medal of Honor Was Given For Stealing A Train 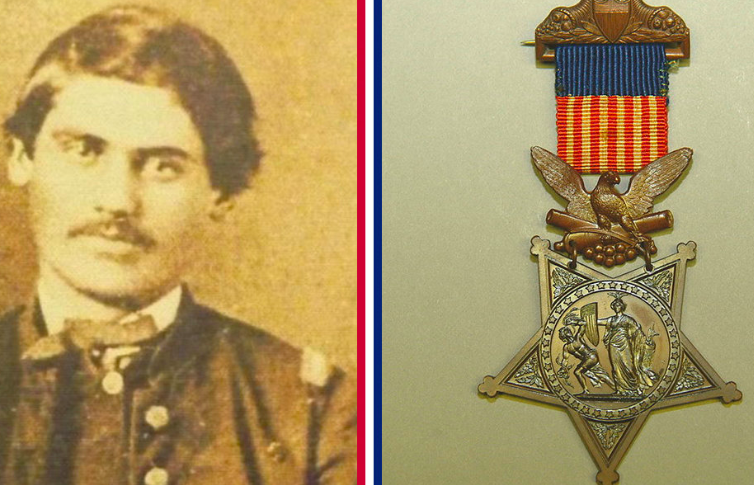 Jacob Parrott was one of the Union soldiers to volunteer for a daring mission to steal a Confederate train and use it to sabotage miles of railroad and telegraph infrastructure, knocking out Confederate communications and supply lines in the midst of a Union advance.

Army Pvt. Jacob Parrott was only 19 when a civilian spy and contraband smuggler proposed a daring plan, asking for volunteers: A small group of men was to sneak across Confederate lines, steal a train, and then use it as a mobile base to destroy Confederate supply and communications lines while the Union Army advanced on Chattanooga.

It was for this raid that the Army would first award a newly authorized medal, the Medal of Honor. Jacob Parrott received the very first one.

The military and political situation in April, 1862, was bad for the Union. European capitals were considering recognizing the Confederacy as its own state, and the Democrats were putting together a campaign platform for the 1862 mid-terms that would turn them into a referendum on the war.

Meanwhile, many in the country thought that the Army was losing too many troops for too little ground.

It was against this backdrop that Union Gen. Ormsby Mitchel heard James J. Andrews’ proposal to ease Mitchel’s campaign against Chattanooga with a train raid. Mitchel approved the mission and Andrews slipped through Confederate lines with his volunteers on April 7, 1862.

An illustration for The Penn publishing company depicting the theft of the “General” locomotive by Andrews’ Raiders.

The men made their way to the rail station at Chattanooga and rode from there to Marietta, Georgia, a city in the northern part of the state. En route, two men were arrested. Another two overslept on the morning of April 12 and missed the move from Marietta to Big Shanty, a small depot.

Big Shanty was chosen for the site of the train hijacking because it lacked a telegraph station with which to relay news of the theft. The theory was that, as long as the raiders stayed ahead of anyone from Big Shanty, they could continue cutting wires and destroying track all the way to Chattanooga without being caught.

At Big Shanty, the crew and passengers of the train pulled by the locomotive “The General” got off to eat, and Andrews’ Raiders, as they would later be known, took over the train and drove it north as fast as they could. Three men from the railroad gave chase, led by either Anthony Murphy or William Fuller. Both men would later claim credit for the pursuit. Either way, “The Great Locomotive Chase” was on.

For the next seven hours and 87 miles, the Raiders destroyed short sections of track and cut telegraph wires while racing to stay ahead of Fuller, Murphy, and the men who helped them along the way. The Raiders were never able to open a significant lead on the Confederates and were forced to cut short their acquisition of water and wood at Tilton, Georgia.

This led to “The General” running out of steam just a little later. The Raiders had achieved some success, but had failed to properly destroy any bridges, and the damage to the telegraph wires and tracks proved relatively quick to repair.

Mitchel, meanwhile, had decided to move only on Huntsville that day and delayed his advance on Chattanooga. All damage from the raid would be repaired before it could make a strategic difference.

An illustration for The Penn publishing company depicting the Ohio tribute to Andrews’ Raiders.

The Raiders, though, attempted to flee the stopped train but were quickly rounded up. Eight of them, including Andrews, were executed as spies in Atlanta. Many of the others, including Parrott, were subjected to some level of physical mistreatment, but were left alive.

Parrott and some of the other soldiers were returned in a prisoner exchange in March, 1863. Despite its small impact on the war, the raid was big news in the North and the men were received as heroes. Parrott was awarded the Medal of Honor that month, the first man to receive it. Five other Raiders would later receive the medal as well.

“The General” went on an odd tour after the war, serving as a rallying symbol for both Union and Confederate sympathizers. “The General” was displayed at the Ohio Monument to the Andrews’ Raiders in 1891. The following year, it was sent to Chattanooga for the reunion of the Army of the Cumberland.

In 1962, it reprised its most famous moments in a reenactment of the raid to commemorate the centennial of the Medal of Honor. It now sits in the Southern Museum of Civil War & Locomotive History in Kennesaw, Georgia, the same spot from which it was stolen and the chase began.

READ NEXT: THE PLANE AND MISSION THAT INSPIRED THE STAR WARS ‘TRENCH RUN’

Article Name
The First Medal of Honor Was Given For Stealing A Train
Description
The Medal of Honor is our nation's highest award for military valor. The very first Medal of Honor was given to Jacob Parrott during the Civil War, for stealing a train. Here's the story!
Author
Logan Nye
Publisher Name
We Are The Mighty