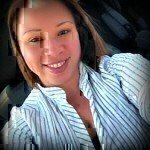 Program Type/Area of Study: Bachelor of Science in Criminal Justice with a concentration in Homeland Security
Years Served: 12 MOS: AG

Athena Williams, currently working as a contract meteorologist and observer for the Navy. I have two children Paige 7, and Justin Jr. 4. I grew up in Fort Stewart, GA with my mom, a Soldier in the U.S.Army and my little brother. In 1999 I entered the U.S.Navy’s delayed entry program (DEP) for a year. Then I left in 2000 for boot camp to later become an Aerographer’s Mate. I rapidly advanced in rank in my first two years in the Navy, and attended weather forecasting school in 2003 as a Second Class Petty Officer where I graduated number one in my class. I have been stationed in Spain, Bahrain, Virginia, and later deployed with the USS Enterprise for their final deployment.
In 2012, after 12 years of honorable service, I transitioned out of the Navy. I enjoy going to concerts, reading, and spending time with my beautiful family.

In 2012, the United States Navy decided to reduce its forces. Unfortunately, my contract was breached and it became time for me to find a new career. The best possible way to transition into a career that was satisfying and would pay enough to take care of my family was to go back to school. My ultimate goal is to work in the Criminal Justice field.

Why did you choose ECPI University?

I chose ECPI University because I enjoy a fast-paced learning environment, and I did not want to waste time with summer breaks.

My experience at ECPI University overall has been great! Like any other institution there were a few instructors that I felt could have done a better job. The majority though were AMAZING!

The biggest challenge I had adjusting to campus culture after military life was having no authority over students that came to class to hang out and/or cause problems. I sometimes had to remind my classmates that they were adults.

Yes! If I had attempted this type of school at an earlier age, and without my military experience I may not have maintained the GPA that I was capable of or graduated on time. I am proud to say that I graduated with a 4.0 GPA!

Don’t walk in thinking that your military experience supersedes the knowledge and skills of those around you! Instead, share your strengths and accept that you have a lot to prove in the civilian world.