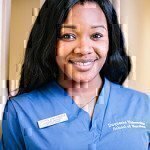 I graduated high school with plans of joining the armed forces, but I got a scholarship to join a different team. I signed a scholarship to run track at Pennsylvania State University. When I got to new student orientation, I was informed as a D1 athlete whose team is in the top 25, won Big Tens the past three years, and whose coaches had big plans for you, options were few. I changed majors a few times won a few Big Ten championships and then joined the greatest team in the world, the U.S. Army.

I returned to school as soon as I could. Joining the Army gave me options to get back in the civilian classroom. I wasn’t able to do nursing the first time around because I had a busy schedule. I knew it was my calling to help people and assist them to function at the best of their abilities. After college, I needed a career in something that would support me professionally and financially. I went back to the drawing board, and all of the signs lead to nursing. Through research, I found that I could obtain my Bachelor’s of Science in Nursing degree in less than two years. I learned there were several routes to the same ending, but I needed an end that leads to a brighter future.

Why did you choose Duquesne University School of Nursing?

I currently use the GI Bill and PA-EAP as an educational benefit.

I get encouraging emails and updates from my academic coach. There is an open line of honest communication that gives me a comfort in my academic endeavor that someone else is as invested in my education as I am.

As a National Guardsmen, it wasn’t too hard to transition into campus life. Lectures are structured, and we move from class to class as a unit or stay put in one classroom for two lectures. A wide range of learning strategies is used to keep one engaged during lectures.

My military experience has shaped me to become a better student. I pride myself in my attention to detail. It has become second nature to be at the place, the right time in the correct uniform.

My advice to veterans returning to school is to look for a place where they accept you as a member of a team. Look for a place that has an open line of honest communication. Go with your gut instinct it’s always right.