How to Develop a Professional Civilian Wardrobe 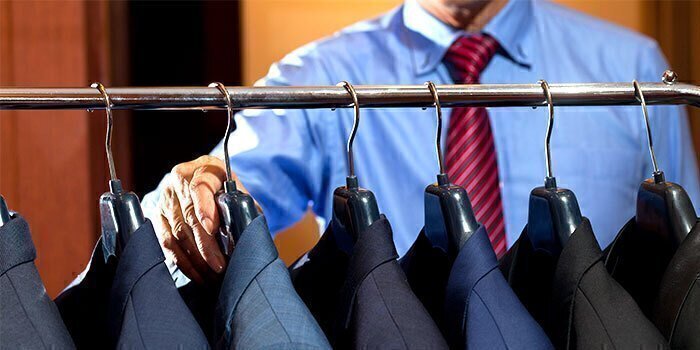 One of the most surprising hidden costs of transition is the purchase of professional attire.

Most veterans don’t give their clothes a single thought because wearing a prescribed uniform makes life very simple in this regard. It can be a rude awakening to find out one’s civilian clothes are not suitable for a new job, especially because buying a wardrobe gets expensive. To avoid costly mistakes, and to fit in well with a civilian job, follow these guidelines:

“Liberty Attire” is not a Professional Wardrobe. In some services (at least at the basic training level), “liberty attire” is controlled as much as a uniform. By the time of transition, however, service members have usually learned to walk a fine line between requirements on shirts being tucked in or no ripped clothes with trying not to look excessively military. Or they use civilian attire as a personality statement by wearing cowboy boots or hunter camouflage (for example). But these things do not a professional wardrobe make. After years of buying civilian clothes to satisfy military standards or to project a “look,” it can be tough to transition to professional attire.

Different professions have different expectations. It’s a common myth that a professional wardrobe should contain suit-and-tie combinations. But dressy slacks and dress shirts–defined as a buttoned, collared, long-sleeved shirt of crisp cotton–look decidedly odd in certain professions. For example, tradesmen like electricians and field maintainers (such as those who do on-site maintenance of cell towers or business machines), as well as foremen and store managers, do not typically dress up in a business suit for their job. The best gauge of expected attire at a new job is to tour the workspace before starting there and see what others are wearing.

Professional attire is usually not very fashionable. In the civilian world, sleek, form-fitting shirts are best left for nightclubs, and ratty print T-Shirts are for the weekend. Like a uniform, professional attire should convey respect for the job and membership in your new civilian team. Noticeably “fashionable” clothes–arrestingly bright colors, large logos, or conspicuous designs–are not considered professional. Females have a much broader spectrum of clothing options which do, in fact, include bright or detailed clothes. Nevertheless, professional attire for females does not include overly casual clothes (like yoga pants) or revealing outfits.

Expectations vary by region. The definition of “business casual” is very local. Generally, the west coast permits jeans and casual shirts, the east coast prefers suits (with either skirt or slacks for females), and the Midwest strikes a middle ground by expecting khaki-style pants and/or skirts for females, along with casual shirts and sweaters. Also, note that urban workplaces trend towards the dressy while suburban/rural areas are more relaxed.

Pay attention to dress codes and uniforms. For certain professions, such as retail or distribution, employees may have to wear a company-logo shirt or jacket. But even without that requirement, there may still be a dress code. Sometimes it’s simple like “pants which aren’t jeans and a tucked-in, collared shirt.” Other times a dress code will specify what colors to wear. Industrial employers, for safety reasons, may require steel-toed boots or natural-fiber clothes.

Professionalism means dressing for the occasion. Everyone knows to wear a suit to an interview. But will you ever use your dressy clothes again? For big work events, like a customer visit or a presentation, dressing up more than usual is expected. Upgrade the khakis-and-polo to a dress shirt and tie. It’s always good to ask an experienced employee, “how much do I have to dress up for this event?” in order get a read on norms in your company or the industry. On the other end of the spectrum, “casual Friday” is not an excuse to break out the ratty jeans and print T-Shirt–in this scenario jeans and shorts are usually permitted–though you should wear at least a collared casual shirt.

Have enough clothes to get you through an entire week. The military often issues many sets of uniforms to service members, and/or they “acquire” more sets as they go through their career. But only stocking up on one suit, or one pair of khakis, or only having two or three collared shirts will mean a lot more laundry during the work week (and get repetitive). At least three pairs of pants for work, and at least six shirts, should go a long way to making civilian clothing options nearly as simple as the military routine. For corporate jobs requiring a suit, have at least two suits, five collared shirts, and seven ties for maximum flexibility

Shoes matter. Sneakers, cowboy boots, flip-flops, and combat boots are all inappropriate professional attire. For dressy clothes, have dress shoes in both brown and black. For more casual expectations, regular leather shoes are fine. For females, high heels are considered more suitable for a social occasion whereas middle-height heels are fine. For industrial or field-type jobs, work boots are appropriate (waterproof if necessary).

Don’t spend a lot of money. Avoid trendy chain stores like Banana Republic or American Eagle, and upscale department stores like Bloomingdales and Nordstrom’s, which are all very expensive. Large retailers like Target and Wal-Mart, as well as discount retailers like Kohl’s and TJ Maxx, offer serviceable clothing items–polo shirts, dress shirts, khakis, and sweaters–in the $20-$30 range. Suits are expensive clothes no matter how you cut it, but department stores typically have a decent variety for around $100-$150 each. Don’t forget to buy dress shirts and ties, however! Jobs which involve a lot of standing up or walking around may merit a quality pair of boots or shoes, which at $150-$200 are probably the most expensive element of professional attire.

Make sure work clothes are comfortable and easy to maintain! Although it might be tempting to buy clothes that fit trimly, try to remember what it was like wearing a dress uniform. Invest in pieces that are comfortable. Also, take advantage of wrinkle-free shirts and permanently creased pants, if applicable. Having enough of the right kind of clothes, which are easy to wear and take little effort in the laudrey room, will simplify professional life greatly and lessen the chance of missing the military uniform.