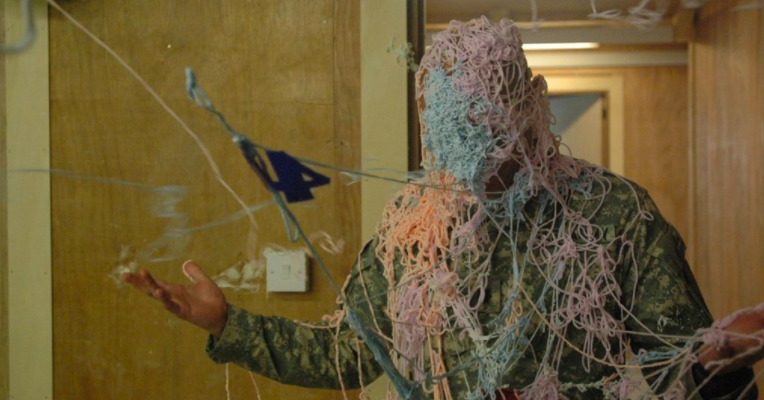 Somewhere along the line, a high-ranking officer saw that same

immature troop accomplish some good through playing with toys and gave the following the seal of approval.

Never underestimate the abilities of a bored infantry platoon looking for a way to let off steam. Stacking and clearing “glass houses” (which are really just white tape on the ground) and using your gun-shaped fingers as mock-weaponry gets kinda dull after a while.

What’s actually fun is when the platoons of hardened warfighters practice their battle drills in the barracks by kicking in doors and tagging each other with Nerf darts while they’re on the toilet.

You thought civilian office pranks were bad? Check out an infantry platoon on a regular Tuesday. (Photo by Staff Sgt. Bryan Peterson)

The rules of engagement are taken very seriously by troops who are deployed. First, you must establish a show of force, letting a potential enemy know you’re armed. Then, you shout, usually through an interpreter or in broken Farsi, to let the enemy know they should back the f*ck up. If they still don’t back away, you can physically “shove” them in the direction they should be going in. Finally, use of force is authorized.

Some troops find it easier to just cover their feet with colored paint than to bust out the real weapons.

Sand tables are used by commanders to show a rough overview of the mission. Many different things can be designated as a unit. This broken stick? The objective. And this pebble will flank in through the south — like this.

Commanders can clear away a bunch of the confusion by ordering a $5 bucket of plastic Army guys. Add a little bit of paint and you’ve got some distinct markers.

“Okay, first platoon. You’re going to wave your rifles in the air like an idiot. Second, you’re going to kneel with a radio.” (Photo by Sgt. Tracy McKithern)

Trip wires are placed by the enemy on the paths through which troops will walk. When someone bumps into it, the attached explosives detonate. The solution? A cheap can of Silly String.

The string shoots out pretty far and is so soft and light that it won’t set off the wire. If troops spray it through a doorway, they’ll quickly discover a trap. Even if a wire is sensitive enough to be tripped by silly string, the surprisingly long range of the spray gives troops enough distance to mitigate some of the explosion.

The military has plans for everything, especially communication. Primarily, units depend on secured, frequency-hopping radios. Alternatively, troops can rely on a slightly less secure radio. In case of an absolute emergency, send a runner.

A cheap, effective, “ah-crap” plan is to use regular walkie-talkies instead of sending that runner to maintain unit integrity.

At least opt for the non-kiddie version to save some dignity. (Photo by Staff Sgt. Timothy Koster)

Article Name
5 Children's Toys With Tactical Capabilities
Description
These children's toys will take you right back to your younger years. Here are the 5 children's toys that have tactical military uses.
Author
Eric Milzarski
Publisher Name
We Are The Mighty