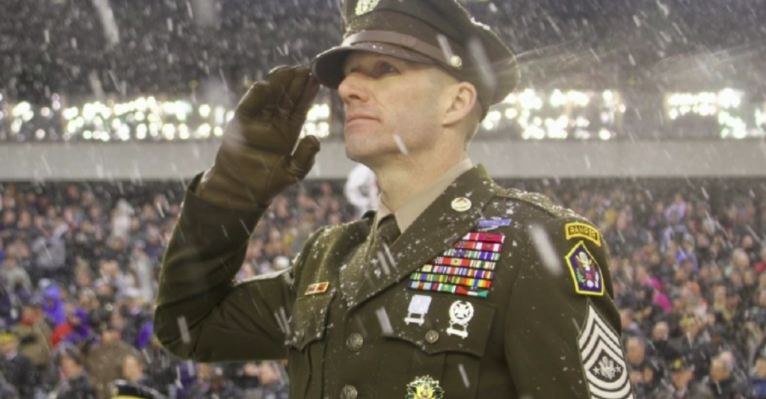 It’s almost time for the Marine Corps’ Blue Dress Uniform to get knocked off their pedestal for the first time since their introduction in the late 19th century. The Army’s recent change to the uniform standard reintroduces the much-beloved WWII “Pinks and Greens” dress uniform. So far, this decision has been met almost-universal praise from the Army and veteran community.

Recent changes have been made to the prototypes. Sgt. Maj. of the Army, Daniel A. Dailey, brought four soldiers to Capitol Hill on Feb. 2 to spotlight the variations of the new dress uniform.

Here’s what you need to know.

The uniforms are a callback to the dress uniforms worn by WWII-era soldiers and they’re just beautiful. The first prototypes surfaced at the annual AUSA meeting and were made nearly-official when Sgt. Maj. Dailey wore them to the Army-Navy game.

I’m not saying that we won the Army-Navy game because of how majestic the “Pinks and Greens” are, but if that’s why, I wouldn’t be surprised.

The headgear looks much sharper than the current dress uniform’s beret. The crush cap and garrison cap are a welcome callback to previous generations of soldiers. The crush cap will be authorized for NCOs and officers. The garrison cap will, to put it bluntly, look better on a Private’s head if they don’t know how to properly shape a beret.

The reintroduction of the “Pinks and Greens” headgear will be another nail in the coffin of the standard-issued black beret.

It’s always great when we have the opportunity to share our Pink & Green uniform prototypes with #Congress and the #American public! These Soldiers do a great job showcasing our pre-decisional options #armystrong #SoldierForLife @PEOSoldier @USArmy pic.twitter.com/NnUewGSd1J

Not only does the belt give soldiers a much slimmer appearance, it also distinguishes the Class-A uniform from the business-suit-with-medals look that the Air Force has going on. Even from the back, this belt makes the uniform clearly identifiable as military.

I guess it also gives the “bigger” folks in formation an incentive to shrink their waistline.

I spent some time on #Capitol Hill today with our Pink & Green uniform prototypes. Lots of great feedback & discussion on how they look. #armystrong #SoldierForLife @PEOSoldier @USArmy @UnderSecArmy @ArmyChiefStaff pic.twitter.com/7ApJ3i0il9

For male soldiers, setting up the ribbon racks, awards, badges, and name tapes are simple. Take a ruler and go 1/8th of an inch up from the pocket, make sure they’re not crooked, and you’re done. Female soldiers? Not so easy.

Without the pockets to use as a guideline, female soldiers have to put on the uniform, approximately mark where everything should go according to the name tape (which should be 1″ to 2″ above the top button), take off the uniform, affix decorations, put the uniform back on, realize everything’s slightly off, try again, realize it’s still off, and then give up hope and pray no one notices. Those pocket flaps will make things much simpler for female soldiers setting up their dress uniform.

Also read: 4 most annoying regulations for women in the military

Even the WAC of WWII understood the need for female pocket flaps.

@15thSMA #pinksandgreens Someone said there was no women’s version in WWII but of coarse ruse the WACs had one. pic.twitter.com/XWwTtEv4WS

The current maternity Class-A uniform isn’t being changed by much, except for tweaks to the color scheme and the addition of shoulder epaulets to show the soldier’s rank. Although these are small changes, they go a long way in making the uniform “more military.”