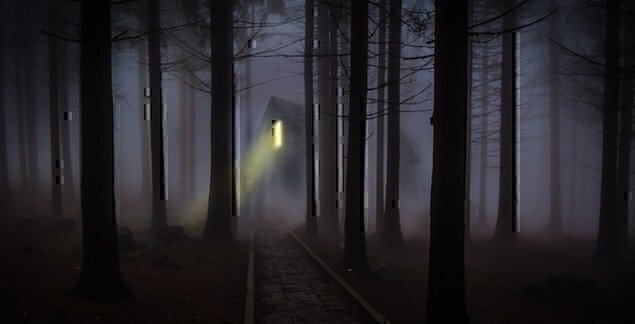 Military installations have long been considered places of haunted memories and troubled ghosts. According to www.militaryghosts.com, there are a dozen war-torn military forts and bases that are considered haunted by their previous tenants and soldiers. Read below for our top three ghostly sites. Have you visited any of these creepy haunts?

This original military post was founded in St. Louis in 1805 and served as a garrison and a trading post with the Indians. Between 1828 and 1904, Fort Bellefontaine remained unoccupied, silently standing guard along the Missouri River, a scant 15 miles north of St. Louis.

In that time, most of the wooden buildings of the fort on the bluff had rotted away, leaving only their limestone foundations. In a historic photograph taken in 1909, a single log cabin, believed to be the remnants of a soldier’s quarters, was the only evidence that a military post had existed on the site. The site of the first cantonment at the river’s edge had all but been obliterated by the currents of the Missouri River.

On April 5, 1904, the remains of 33 officers, soldiers and family members who had been buried at Fort Bellefontaine between 1806 and 1826 were moved to the Jefferson Barracks National Cemetery in south St. Louis County.

These “unknowns,” including the body of Zebulon Pike’s 2-year-old daughter, were reburied on a high bluff overlooking the Mississippi River in the “Old Post Section #1” of the National Cemetery. The St. Louis Chapter of the Daughters of the American Revolution erected a large memorial, consisting of a granite boulder and commemorative plaque, at the site.

Over the years, many different visitors to the site have claimed to constantly see, hear and feel things that they just could not explain.

Oddly enough, the most eerie ghost stories center on the “Grand Staircase.” It is said that most of the pictures taken of the first or second tier of the staircase reveal the presence of what appears to be dark red smoke on the stairs.

It has been said that people have experimented by taking photographs of the stairs using different kinds of cameras and film and in each instance, the anomalous red light always appears on the stairs.

This Texas post was established in 1867 to protect the frontier settlements and to patrol the vast reaches of the Texas wilderness. Although closed down after only 22 years, many of the officers and soldiers here continue to do their duty from beyond the grave!

In 1935, the city of San Angelo acquired Fort Concho and began restoring the fort to its former glory. The city’s plans for reconstruction of the site were so successful that in 1961 the fort was designated as a National Historic Landmark.

One of the most haunted locations at Fort Concho is the officer’s quarters, also known as “Officers Row.” Located across the parade ground from the enlisted barracks, this row of sturdy stone houses serves as the impetus for most, if not all, of the ghostly tales that are told about Fort Concho.

Fort Concho’s most distinguished commander, Col. Ranald Mackenzie, is said to haunt his old residence at the center of Officers Row. The ghost of Col. Mackenzie has been seen by visitors and staff at the old house on more than one occasion.

It is said that Col. Mackenzie was fond of his house and its location because he could see almost everything that was going on in the fort at any given time. The house was also located in a position that afforded Col. Mackenzie a full view of the old stone corral where his unit’s 127 Indian captives were held over the winter of 1873.

While preparing for a winter event one December, a female staff member working in the Mackenzie house reported that she had heard the unmistakable sound of footsteps walking around the back of the room behind her.

Just as the woman turned to see who was there, she was knocked up against a wall by an invisible blast of cold air. Frightened and disoriented, the woman also noticed that the “unique sound of knuckles cracking” seemed to accompany the strange manifestation. Since Col. Mackenzie was known for cracking his knuckles, there was no doubt in the woman’s mind that she had come face to face with the spirit of the famous commander.

Over the years, it has become known for the variety of hauntings that occur here, including the very interactive presence of a “commanding” ghost.

Savannah, Ga., is the home of the Fort Pulaski National Monument. Construction of this stately coastal fortification, built using more than 25 million “Savanna Gray” and “Rose Red” bricks, was completed in 1847. This valuable defensive position, which looks like a truncated hexagon and consisted of a moat, parade ground and two powder magazines, played a critical role in the Civil War.

In 1864, 550 Confederate prisoners were held at Fort Pulaski under the watchful eye of the Union troops garrisoned there. While incarcerated at the fort, these heroes of the Confederacy endured starvation, scurvy and crippling dysentery.

Of the 550 prisoners, 537 would walk away from their prison alive when they were transferred to Fort Delaware a year later. The remaining 13 prisoners died at Fort Pulaski, their bodies ravaged by emaciation and dehydration.

There have been many ghostly sightings at Fort Pulaski over the years. One particular encounter is relevant to our discussion because it appears to have involved a very “commanding” interactive ghost.

In the late 1980s, Savannah was again occupied by both federal and Confederate troops. These Civil War re-enactors were involved in the filming of the movie Glory, which starred Morgan Freeman, Matthew Broderick and Denzel Washington and was shot on location around Savannah.

One group of re-enactors took advantage of some of their free time and visited Fort Pulaski while en route to the movie set. While these modern day Civil War soldiers were exploring the fort, a young man wearing a Confederate lieutenant’s uniform approached them. This young Confederate officer began to reprimand the re-enactors for not saluting him upon his approach. The lieutenant then ordered the re-enactors to fall into formation because a Yankee attack was imminent.

The re-enactors wanted to put on a show for any other visitors in the fort at the time, and decided to follow the lieutenant’s commands. The lieutenant ordered the re-enactors to face about (turn away from him), which they did without question. This was the last time they would ever see the brash Confederate officer again. According to the re-enactors, the young man just disappeared and was never seen again