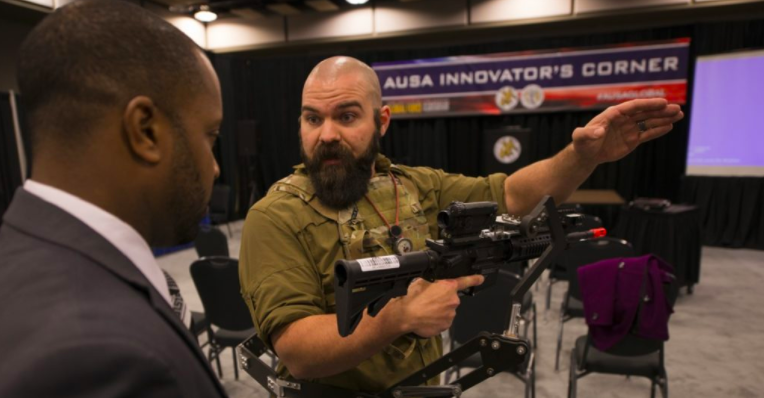 If you’re a fan of the movie Aliens, then you probably remember the mechanical third arms that the Space Marines used to help support their giant weapons systems. Last year, the Army tried out a real-life version of the device at Aberdeen Proving Ground in Maryland, seeking to help Soldiers shoulder burdens in excess of 100 pounds. Too much unassisted lifting, according to an Army researcher in a 2017 report, could result in Soldiers “getting broken, sometimes in training, before they see a day in combat.”

Well, the initial prototype finished its testing and the six Soldiers who tried it gave their feedback. Now, according to an Army Times report, the Army reportedly has designed a new version and is looking for fifteen  volunteers to test it out.

The Army Research Laboratory is developing a “third arm” passive mechanical appendage that could lessen Soldier burden and increase lethality. Weighing less than 4 pounds, the device attaches to a Soldier’s protective vest and holds their weapon, putting less weight on their arms and freeing up their hands to do other tasks. (US Army photo)

The six Soldiers who tested the initial prototype, which was front-mounted, had some good news for innovators: It did reduce fatigue. The sensors that participants wore throughout testing showed that the device measured lower muscle activation as well. However, like all ideas born in the mind of a science geek, there were a few implementation problems and the device wasn’t quite ready to hit the field.

So, after a short trip back to the lab, the Army is back with a new version that weighs in at about three and a half pounds. The arm is now mounted on the back and has a new hinge plate to help the device work on folks with various body types. After all, the Army is made up of unique individuals, not battalions of clones… oh, wait, that’s a different sci-fi franchise.

These “third arms” are generally capable of hoisting an M249 Squad Automatic Weapon, which weighs roughly 27 pounds. They are also capable of holding shields that weigh about 20 pounds. The next round of tests will seek to determine how well the third arm handles shooting at moving targets, assisting with recoil mitigation, and shooting while on the move.