Why Army-Navy Football Game is So Special 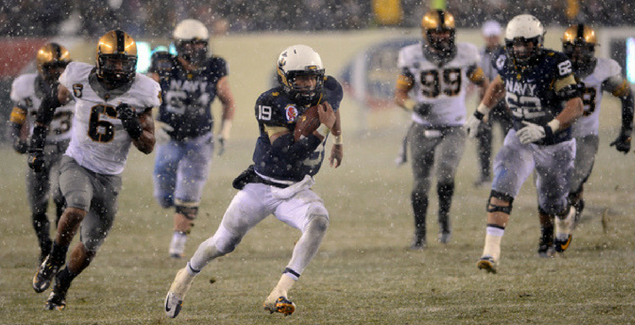 Clearly, the annual Army-Navy football game is an event unlike any other in college athletics. Only those who participate truly understand the significance. USA TODAY Sports asked a former player from each team to share what the game means to them. These are their stories.

ARMY-NAVY. There really is no rivalry like this in college football. For starters, what you are playing for is much bigger than the teams. You are representing the entire United States Army and United States Navy. For the seniors, the fact that you will battle against each other in one of the final games of your career, and then join the same team, the United States Military, and work together after graduation to defend this country, makes this rivalry unique. This was “THE GAME” that would make or break your season. If you lost to Navy, regardless of how many games you won, it would ruin your season.

Our head coach, Bob Sutton, always reminded us that this game was like no other and would usually come down to whatever team made that one or two plays toward the end. He reminded us to not make this game bigger than it already was and to prepare as if it would come down to the last play. We were 4-0 against Navy my four years. However, we very easily could have been 0-4. Every game was decided in the final minutes (or seconds) and the total margin of victory was six points.

Navy was in a position to win every one of those games and very well could have. It was like brothers fighting it out, only to sing each other’s fight songs together afterward. It was a game and rivalry that represented the very definition of respect. We had a higher level of respect for Navy than any opponent. We were so similar in so many ways.

There is a plaque every player would touch on the way out of the tunnel for our games. It had a quote from General George C. Marshall, Chief of Staff of the U.S. Army during World War II: “I want an officer for a secret and dangerous mission. I want a West Point football player.” We took great pride in this quote and the responsibility you felt as a player. We all came to West Point for different reasons; however, we all came with a sense of obligation to our country.

Thanks to John Feinstein, who authored A Civil War: Army vs. Navy, A Year Inside College Football’s Purest Rivalry, I was able to spend some time with Andy Thompson, Navy’s team captain. To this day, Andy has been a dear friend. I couldn’t help but think how it must have felt to come so close yet never win. After the game our senior year, I found him, cried with him, gave him a big hug and told him we would be brothers for life. As a matter of fact, we have had a dinner bet every year since we graduated! As we all know, he has won the past 14 times! I’m pretty confident there will not be a 15th!! This streak has come to an end! Go Army-Beat Navy!!!

Cantelupe was team captain his senior year. After graduating from West Point, he served in the Army and later played defensive back for the Chicago Bears. He is a founding partner of Summit Trail Advisors, which manages money for ultra-high net worth business owners, athletes, actors, and entertainers.

I played in four Army-Navy football games. And lost them all — by a total of six points.

Each was highly competitive, well-coached and played at a fever pitch. The outcomes were uncertain until the final whistle. Despite the losses, the experiences were worth it.

The game has become more meaningful for me over the years. I think the Army-Navy game also means something to our country. In times of challenge, adversity and discord, Army-Navy remains a shining example of our country’s potential.

Army-Navy means mutual respect. After our final contest in 1995, Army co-captain Jim Cantelupe left his team’s celebration and asked to meet me in the hallway of a cavernous Veterans Stadium. He expressed his thanks for a game well-played. It was truly one for the ages. Navy was stopped three times inside the 3-yard line, and then a 99-yard drive by Army produced the winning score. The final: 14-13. In the midst of a difficult loss, Jim’s kindness and sportsmanship will remain with me forever. It was an act of class and goodwill.

Army-Navy means unity. Without fail, West Point and Annapolis continue to produce some of the country’s finest young military officers. After their respective playing days are over, Army and Navy football players answer the nation’s clarion call. Far from the spotlights and pageantry of the game, they serve together in every clime and place. Their sense of duty unifies them in the pursuit of national victory. They support and defend our homeland without complaint, in a spirit of discipline, toughness, intelligence and character.

Army-Navy means unconditional friendship. Players on each team become lifelong friends — forged in the service-academy experience and unified by the fires of college football. After athletic and military journeys eventually end, the friendships endure — within each team and between each team. I’m certain Army football players would do anything to help a Navy player in need. Army can count on Navy to do the same.

On Dec. 10, the game will be played with a burning passion and competitive spirit. More importantly, millions of viewers will see great examples of our national potential for mutual respect, unity and unconditional friendship.

Thompson played for Navy from 1992 to 1995. He graduated from the Naval Academy in 1996 and retired from the Marine Corps as a lieutenant colonel. He is the president and CEO of Thompson Development Group, a business services and consulting firm. He lives in Texas with his family.