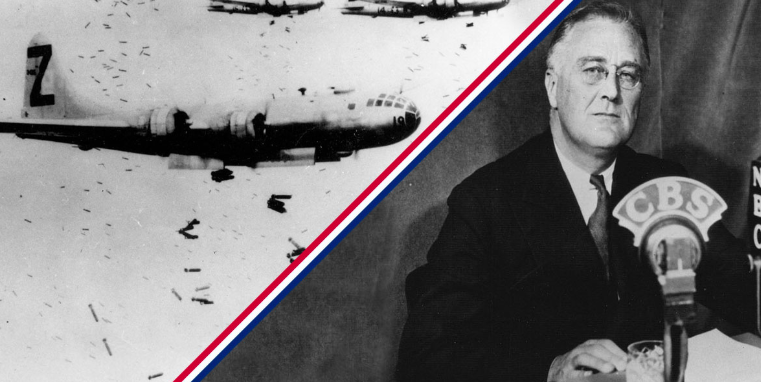 A secret plan was passed around the Roosevelt Administration in 1940 and 1941 that called for dozens of American bombers with American crews masked by Chinese markings to fly bombing missions against Japanese cities, crippling crucial war production facilities and, hopefully, keeping Japan too busy with China to attack British and American interests in the Pacific.

For President Franklin D. Roosevelt, the late 1930s and early 1940s were a minefield of grave threats to the American people. The war in Europe posed a significant threat to American allies while growing tensions in the Pacific were looking disastrous to both allied and American interests and territory. All the while, the American economy was still trying to scramble its way out of the Great Depression.

There is debate today about whether Roosevelt was trying to pull a reluctant America into war with Japan in 1940 and 1941, but it is certain that he saw American and British interests as being threatened by the island nation — and he wanted to make sure that the Japanese were either deterred from attacking Western interests or so hamstrung by the war with China that they couldn’t attack.

One of the plans that emerged from his administration would later become known as “JB 355.” It called for the formation of a new Chinese front company using money from the Lend-Lease Act. This company, headed by former Army pilot and then-director of the Chinese Air Force flight school, Claire Chennault, would be a Second American Volunteer Group. Like the First American Volunteer Group, it would be disguised as a Chinese mercenary group but manned by American pilots and supplied with American planes.

The 1st AVG was already formed and undergoing training in the summer of 1941 when JB 355 was approved. With 100 American fighter aircraft and 99 American pilots, it was preparing to attack Japanese air forces and disrupt their shipping operations.

It would do so starting in December 1941, after the Pearl Harbor attacks. It quickly came to be known as the Flying Tigers.

Some of the pilots in the First American Volunteer Group pose with their P-40.

The mission of the 2nd AVG, approved in July 1941, would be very different. Comprised of 50 American bombers and the appropriate crews, the 2nd AVG was to drop incendiary weapons on Japanese cities, like Tokyo, that were essential to Japan’s war production.

The attacks were tentatively scheduled for November.

The first planes ordered for the Second American Volunteer Group were Lockheed Hudsons, but they were never delivered because shortages delayed their production until after the Pearl Harbor attacks made the company unnecessary.

(National Museum of the Air Force)

Because American industry was not yet on a full, wartime footing. There simply weren’t enough supplies to fulfill all the approved requests.

Army Chief of Staff Gen. George C. Marshall was struggling to get supplies everywhere they were needed throughout 1941. He detailed some of his efforts and setbacks in a February letter to Lt. Gen. Walter C. Short who had just taken command at Pearl Harbor. In the letter, he explained where all of his supplies were going but promised that his priority was to protect the Navy’s fleet:

You, of course, understand the pressures on the Department for the limited materiel we have, for Alaska, for Panama, and, most confidentially, for the possible occupation of the Azores, not to mention the new leased bases. However, as I have already said, we are keeping clearly in mind that our first concern is to protect the Fleet.

This left little materiel for a secret bombing force, even one with Roosevelt’s blessings. When the Japanese attacked at Pearl Harbor, the 2nd AVG’s first bomber crews were still en route to Japan and its first bombers were just notations on spreadsheets.

The 2nd AVG was effectively canceled and its personnel brought back into the U.S. uniformed forces to fight in the war. The 1st AVG, already in a position to fight, first saw combat less than two weeks after the Pearl Harbor attack and would serve as America’s primary offense against Japan months before the Doolittle Raid.

Article Name
America's Secret Plan to Bomb Japan Before Pearl Harbor
Description
During World War II, prior to America being forced into the war due to the bombings at Pearl Harbor, America secretly planned to bomb Japan. Here's the story.
Author
Logan Nye
Publisher Name
We Are The Mighty