Sean Lux woke up one day and decided to go to law school. He’d thought about it many times before, including during six years of active duty service in the Air Force, four years in the Air Force Reserve and a career as a civilian software engineer.

“The thought of going to law school had always lingered in my mind, even while I was still on active duty,” says Lux, now 45. “The ultimate decision was pretty much an overnight thing. I woke up one morning in December of 2014, I think, and looked to see when the law school admission test was being given. I then realized that the cutoff date was just a short time away, so I signed up for the February exam.”

Today Lux is a third-year student at Ave Maria School of Law* in Naples, Fla., and expects to graduate in December 2017.

We asked Lux about his path to
law school, why he founded an Honor Flight chapter in Naples, how he juggles school with running a nonprofit, and what are his plans after law school.

“The recurring theme is that I am bad at planning but good at execution,” he says. “I imagine I will wake up one day soon and have a plan come to me.”

What did you do in the Air Force?

Lux: I was an electronics technician working on electronic warfare systems for fighter aircraft. These systems “jam” enemy radars to prevent the aircraft from being shot down by surface-to-air missiles. I was responsible for repairing them and for performing performance checks on them.

What was your exit plan?

Lux: I actually had over two years remaining on my enlistment. I applied for an early release. In allowing the early release, they required me to join the active reserves. Beyond this, I had no plan.

You have a degree in computer science, an MBA, and work experience as a software engineer. Why did you decide to earn a law degree?

Lux: After working as a software engineer for a number of years, I became less and less satisfied with the work. I began volunteer work with nonprofit organizations in order to truly feel like I was contributing to society. The more work I did, the more I realized I had to make a change. I figured that a new career in law would allow me the opportunity to earn a living pursuing my passions.

What steps did you take to make it a reality?

Lux: I just decided that I was going to take the test, apply to schools, and see what happens. I was also determined to make it happen NOW. I was not going to wait another year.

What obstacles did you have to overcome?

Lux: I had to talk my fiancée at the time (now my wife) into allowing me to make the transition.

Was anyone skeptical of your plan?

Lux: No. My wife is the most supportive person in the world and she has worked so hard to make sure that I can concentrate on my schooling. My mom may have been a bit surprised, but she knows better than to be surprised about anything I come up with.

Why did you choose Ave Maria School of Law?

Lux: I am firmly established in the Naples, Fla., area, so it was really a no-brainer. I was also impressed by the mission of the school and their high ethical standards.

Did you identify as a veteran when you enrolled?

How did that affect your experience at Ave Law?

Lux: The dean and several professors are prior JAG officers, which I truly respect. I also know that it is a mutual respect. The administration as a whole appreciates the former service of their students and they are committed to helping us succeed.

You’d been out of higher education for at least a decade when you decided to go back to school. Was that a difficult adjustment?

Lux: Yes, extremely difficult. Honestly, the brain doesn’t work quite like it used to. It took several months to really adjust to studying.

Do you believe your military experience helped you as a student?

Lux: Honor, integrity, excellence. These are the values I learned many years ago that are just as relevant today as I hope to enter into the legal profession. In the military you also learn about commitment. Law school isn’t exactly easy. It takes true commitment to succeed and excel.

How did you get involved with founding Collier County Honor Flight?

Lux: My wife and I saw a documentary titled “Honor Flight,” which details the mission of the Honor Flight Network by following four veterans as they prepare for their “One Last Mission” with a hub in Wisconsin. We were so impressed with the mission that we volunteered to serve as escorts for veterans for an Honor Flight hub in Bradenton, Fla., which is a couple of hours away. 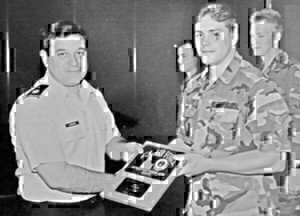 After the flight, we realized that there were far too many WWII veterans to be served by the existing Florida hubs. At the time, roughly 600 WWII veterans were dying every day. Time was of the essence, so within two weeks of taking the flight, my wife and I founded Collier County Honor Flight. Within another six weeks, we found 50 WWII and Korean War veterans who wanted to see their memorial in D.C., and raised enough money to charter a 737. We took our first group of veterans on Nov. 9, 2013.

Why is CCHF important to you?

Lux: It is important to me because it is vitally important to the veterans we serve. I can’t tell you how many times I have heard that the trip was “the best day of my life.” It is truly special for the veterans, life-altering for the “guardians” who volunteer to escort a veteran on the trip, and heartwarming for everyone in the community who comes out to welcome our veterans home after each mission.

How do you juggle your multiple responsibilities?

Lux: It is very tough. For example, I had final exams in the first two weeks of May and an Honor Flight on May 13. I certainly didn’t sleep much. And when most of my classmates were probably studying, I was creating a flight manifest or holding a training session to prepare for the flight. For me, there is simply no option to fail. I do, however, have a very supportive wife who steps in when I get overwhelmed as well as a wonderful board of directors to keep things going when I have to focus more on school.

Where do you see yourself in 10 years?

Lux: Sitting behind a bench, wearing a robe, and holding a gavel.

What about you would surprise most people?

Lux: I am fluent in sarcasm, and if the legal career doesn’t work out, a career as a comedian might.