9 of the Most Intense and Ongoing Military Rivalries 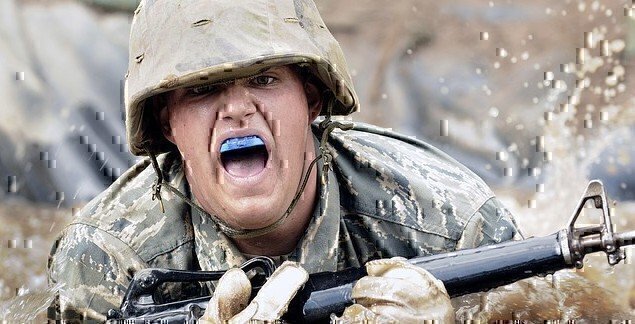 The military is full of type-A go-getters, and those folks love nothing as much as a good rivalry to get their blood pumping. Here are nine of the most intense and ongoing:

In the past few years around the outposts of Afghanistan, both services were essentially doing the same sort of presence missions — either riding around the provinces in MRAPs or patrolling villages in an attempt to win hearts and minds — so the rivalry changed to one based on which branch is more aggressive when reacting to a threat and whose dress uniform has more flashy geedunk on it.

So basically Air Force pilots have traditionally claimed to be superior in carrying out a mission (A-10 is a better close air support platform than an F/A-18, for instance) and Navy pilots have claimed superiority in terms of stick-and-rudder skills because they have to operate around the boat and not an 11,000-foot runway. Navy pilots also used to tease Air Force pilots about the scarves they wore, but they don’t wear those anymore.

It’s worth noting that these days this rivalry has been complicated by the existence of drones, which the Air Force has a lot more of.

The Coast Guard is the most misunderstood of the five branches, mostly because they’re not technically part of the Department of Defense but also because they’re the guys who hassle you about life preservers when you’re water skiing during summers at the lake.

But the Coast Guard also has missions that rival the challenges faced by the Navy, specifically counter-drug and counter-piracy missions that take them over-the-horizon and potentially into harm’s way.

But, Navy guys will still ask Coast Guard guys if there isn’t a buoy somewhere they should be painting.

After 14 straight years of Navy winning this classic, it might be fair to suggest this rivalry isn’t what it once was.

But Army came close to winning this year, and Navy is losing a lot of talented seniors, so signs are good for Army breaking the losing streak next year when the game moves from Philly to Baltimore.

Regardless of the win-loss record, few, if any, sports rivalries have a much meaning as this one. And Induction Day plebes learn to scream “Beat Army!” or “Beat Navy” and it’s ingrained into their DNA from that point forward.

Strangely enough, when the air wing first returns to an aircraft carrier after a period apart, ship’s company personnel kind of treat them like that uninvited relative who shows up over the holidays and empties the ‘fridge.

In turn, the air wingers cop the “if we didn’t bring our airplanes this ship wouldn’t matter” ‘tude.  It always works itself out after the first day of flight ops.

Then jet pilots brag that Hollywood doesn’t make movies about helo guys, but that leaves out the fact that there was that one movie . . . with that guy from that thing . . . you know the one . . . ah, forget it.

This started during Dubble-yew dubble-yew Cold War when the east coast went exclusively to the Mediterranean to play cat-and-mouse with the Ruskies, and the west coast went to the Philippines to drink cheap beer and play “Smiles” at Marilyn’s.

Now everyone winds up in a desert somewhere in the Middle East, so the arguments center around whether the laundromats are better around the strip malls of Oceanside or Jacksonville.

Get a member of one of them and he’s gonna talk smack about one of, if not all of, the others — like what happens when you get all of the superheroes hanging around the Hall of Justice.

Who can run faster, jump higher, shoot straighter and farther, swim deeper, and kill deadlier? Depends which one you ask.

Operators needs things — weapons, vehicles, airplanes, food, shelter — and requirements officers go out of their way to give them something else, all the while lecturing them about the complicated budget process they couldn’t possibly understand because they’ve been out there fighting wars and not wasting their careers stuck in traffic to and from the Pentagon.