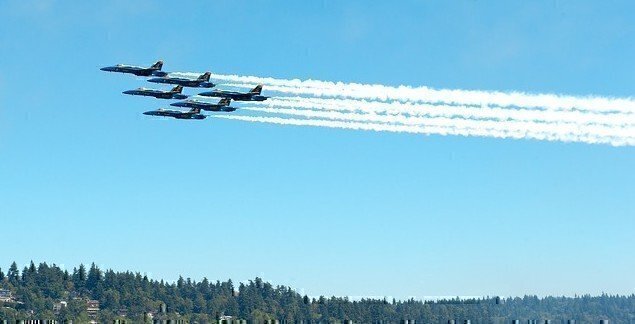 In today’s hi-tech age of drones and stealth and computer wizardry we might have a tendency to take military capabilities for granted. So here are nine military aviation firsts to remind us of how far we’ve come over the last 107 years or so:

The Wright Brothers were contracted by the U.S. Army to conduct first-ever flight trials at Fort Meyer just outside of Washington, DC in 1908.  Wilbur had a business commitment in Europe, so Orville had to do the Army flights by himself, the first time the brothers worked separately since their historic flight at Kitty Hawk in 1903.

On September 17, about halfway into the Army flight program, with Army observer Lt. Thomas E. Selfridge on board, the airplane piloted by Orville Wright experienced a mechanical malfunction involving one of the propellers and crashed. Orville was severely injured and Selfridge died, making him the first military aviation fatality.

Ely’s first launch off the boat.

Eugene Ely was the first pilot to launch from a stationary ship in November 1910. He took off from a structure fixed over the forecastle of the US armored cruiser USS Birmingham at Hampton Roads, Virginia and landed nearby on Willoughby Spit after some five minutes in the air. On 18 January 1911, he became the first pilot to land on a stationary ship. He took off from the Tanforan racetrack and landed on a similar temporary structure on the aft of the USS Pennsylvania anchored at the San Francisco waterfront—the improvised braking system of sandbags and ropes led directly to the arresting hook and wires. His aircraft was then turned around and he was able to take off again. (Source: Wikipedia)

The first real world bombing mission was flown on November 1, 1911 by Sottotenente Giulio Gavotti, against Turkish troops in Libya. Gavotti was flying an early model of Etrich Taube aircraft. It’s also interesting to note that the Turks were the first to shoot down an aircraft (using rifle fire) during that same conflict.

“Hey, while you’re just sitting back there would you mind shooting that guy behind us?”

The first conventional air-to-air kill occurred on October 5, 1914, during World War I, when a gunner on a French Voisin bagged a German Aviatik reconnaissance aircraft.

Adolphe Pégoud shot down his fifth German aircraft in April of 1915, making him the first military ace ever. On August 31 of that same year, Pégoud was shot down by one of his pre-war flight students, Unteroffizier Walter Kandulski, while intercepting a German reconnaissance aircraft. He died in the crash. Kandulski later dropped a funeral wreath over the French lines in tribute.

“Got a stick of Beemans?”

After Bell Aircraft test pilot “Slick” Goodlin demanded $150,000 ($1.6 million in 2015 dollars) to break the sound barrier, the USAAF selected Chuck Yeager to fly the rocket-powered Bell XS-1 in a NACA program to research high-speed flight. Yeager broke the sound barrier on October 14, 1947, flying the X-1 at Mach 1.07 at an altitude of 45,000 ft. over the Rogers Dry Lake in the Mojave Desert.

On April 12, 1961, Senior Lieutenant Yuri Gagarin launched in the the Vostok 3KA-3 spacecraft from Baikonur Cosmodrome, which made him the first human to travel into space and the first to orbit the earth.

9. First military pilot to walk on the moon

Most people assume that Neil Armstrong was an active duty military officer at the time of the Apollo 11 mission, but he was actually a civilian, which makes Col. “Buzz” Aldrin, the second man out of the lunar module, the first military pilot to walk on the moon.