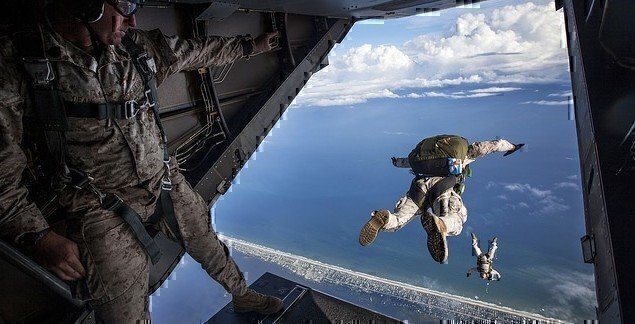 We know it’s hard to keep track of military lingo and technical terms, that’s why we’ve published so many guides (Air Force, Marine Corps, Army, Navy). But there are some terms that the media — especially Hollywood — just can’t stop getting wrong when referring to the military.

Bazooka refers specifically to a series of anti-tank rocket launchers used from World War II through the Vietnam War. American troops today do not fire bazookas. There are modern rocket launchers that do the job the bazooka was once used for, but they have their own names, like the “AT-4” and the “SMAW.”

Bombs are explosive devices that are not propelled. They can be placed somewhere, they can be launched, or they can be dropped, but they are not propelled along their route. They may be guided. Rockets are like bombs, except they are propelled along their route without any type of guidance. The fins don’t move and the projectile can’t turn. Missiles are like rockets except they can turn, either under the instructions of an operator or according to an automated targeting system. One of the most common errors is referring to the Hellfire Missile as a Hellfire Bomb.

Marines are not soldiers, though they have been referred to as “soldiers of the sea” in past recruiting posters. In the U.S., people not in the Army are not soldiers, especially so for Marines — who will strongly protest being painted with that brush. “Troops” or “service members” are the umbrella terms that refer to all the members of the military.

The military doesn’t have Hummers. They have High Mobility Multipurpose Wheeled Vehicles with the acronym HMMWV, commonly pronounced “Humvee.” Hummer is a civilian, luxury knockoff of the HMMWV. Anyone who has seen the inside of a HMMWV knows that it is not a “luxury vehicle.”

Not everyone in charge of troops is a commander. For instance, the highest-ranking officer in each branch, the branch chief of staff, doesn’t actually command anything and is not a “commander.” Neither is their superior, the Chairman of the Joint Chiefs of Staff. The only people who are “commanders” have the word “command” in either their rank or job title.

It’s not strictly a military term, but much is made of Air Force reports of UFOs by conspiracy theorists and alien enthusiasts. Without getting into an argument about whether or not aliens are real, UFOs are just unidentified flying objects. The Air Force recording 12,618 of them from 1947 to 1969 does not mean that alien spacecraft have flown 12,618 or more sorties over American soil. It means that there have been 12,618 recorded sightings or sensor contacts of objects in the air. A balloon in an unexpected spot can be recorded as an unidentified flying object.

“UFO” and “alien spaceship” are not synonyms, even though they’re used that way.

Specifically, this is not shorthand for civilian deaths or a “euphemism.” It is an official term that refers to damage done to any unintended target in any way during an attack. When American bombs were dropped on German trains that were later found to be carrying American prisoners of war, that’s collateral damage to friendly elements. When missiles launched against a bomb maker’s home also damage a nearby mosque, that’s collateral damage.

Machine guns and sidearms are guns. Most soldiers and Marines are carrying rifles. While it would be nice if the news media would use the more exact term “rifle” when referring to rifles, they can get a pass because the civilian definition of gun does include rifles. Entertainment media needs to learn this lesson though, since troops in movies and T.V. would never call their “rifle” a “gun.” It’s drilled into service members with the same ferocity as the meaning of “attention” or the proper way to salute.