77 years after he deployed for WWII, hospice gave this couple the wedding photos they always wanted 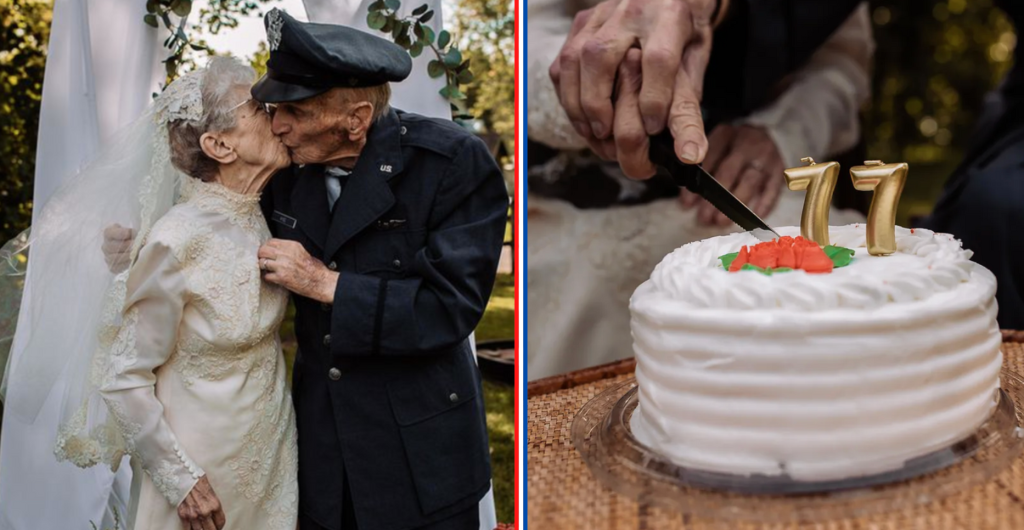 On September 16, 1944, Royce and Frankie King got married. Royce took a two-day leave to come home and marry his high school sweetheart before leaving to fight in WWII. Between the short time available and the war going on, the Kings had no time to get a wedding gown or even a photographer to capture their special day. Nearly 80 years later, they got the pictures they couldn’t take before.

On their 77th anniversary, the Kings were able to create the wedding scene they’d dreamed of with the help of the St. Croix Hospice staff who care for them at their Oelwein, Iowa home. The staff tracked down a vintage 1940s wedding gown for Frankie, and Royce wore his Air Force uniform for the special day. Flowers from the patio were used to make Frankie’s bouquet and a music therapist from St. Croix played 1940s songs as Frankie walked down the notional aisle.

“How can you not have a sense of overwhelming emotion?” St. Croix Hospice CEO Heath Bartness said in an interview with TODAY. “The connectivity you almost feel that you were a part of this, and thinking back to what it was like in World War II the first time, and how meaningful and how emotional this second opportunity to do this was. There’s an overwhelming sense of pride in not just the company and what the organization did, but more so just as an act of humanity.”

Hilary Michelson, a St. Croix staff member and professional photographer captured the photos that Royce and Frankie couldn’t take in 1944. Their daughter, Sue Bilodeau, was visiting from California and was able to witness the event. “It was very emotional, very heartwarming,” she told TODAY. “I couldn’t stop smiling, and I couldn’t stop being so happy for both of them, especially mom in her wedding gown looking so beautiful.”

The first look was done with a handkerchief over Royce’s eyes as Frankie was escorted in front of him. “They said, ‘Are you ready to see your bride?’ and took the blindfold off,” Bilodeau recounted. “He had just the biggest smile the rest of the day. It was amazing.”

The St. Croix staff also made the Kings a special wedding cake with a pair of 7s on it for the 77th anniversary. With it, the couple was able to perform the traditional cake-cutting together. “We can’t thank them enough,” Bilodeau said. “It was wonderful and long overdue. I just got done printing up a photo album, so it will be in the mail and now they will finally have their wedding photos.”