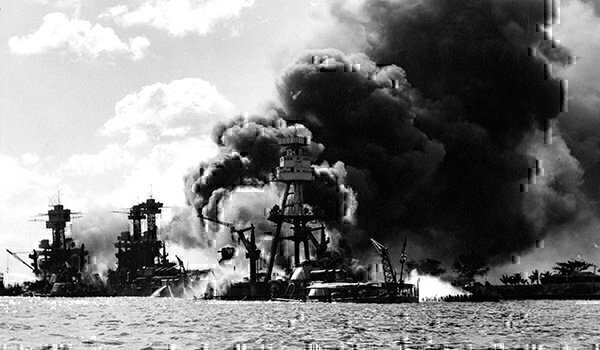 Dec. 7 marks the 76th anniversary of the bombing of Pearl Harbor, a sneak attack by the Japanese in 1941 that took many American lives and thrust the United States into World War II.

The “date which will live in infamy” is commemorated yearly across the entire nation, with many survivors and their families making the pilgrimage to Oahu, Hawaii, in remembrance. While the population of military and civilian survivors from that day has dwindled, their stories and bravery have not.

Ahead of last year’s massive 75th anniversary commemoration, we interviewed several Pearl Harbor survivors about their experiences that fateful day. All these years later, they remain just as fascinating.

Floyd Welch was a 19-year-old Navy electrician when the Japanese started bombing Pearl Harbor’s Battleship Row. His ship, the USS Maryland, was hit twice by torpedoes, which ripped holes in the hull below the water line.

While the damage was minimal, Welch knew he’d been lucky. Four of his colleagues died that day in compartments where the torpedoes hit, and he could have been one of them if it weren’t for a change in his duties.

Meanwhile, the Maryland was docked right beside the doomed USS Oklahoma, so Welch and his crewmates spent the rest of the day rescuing men who’d jumped off it. They also tried to cut holes through its hull to get to those who were still trapped.

Richard Schimmel was one of the first service members to know the Japanese were on their way. His friend and fellow radar tech, Joe McDonald, had told him that he saw something approaching on radar, but he couldn’t do anything about it. His superior told him to ignore it, so he did. And in the military, if your superior gives you orders, you follow them.

Schimmel says a lot of what ifs came out of that day that bothered his friend for the rest of his life. And if they’d had time to set up more radar stations — a relatively new technology — the outcome may have been different.

Melvin Heckman was assigned duties at Ford Island’s firehouse when all hell broke loose. He and his fellow sailors sped from hangar to hangar, dodging bombs that came within yards of them.

To get water to fight the fires, they ended up right beside the USS Arizona and watched in horror as it took four direct hits. Amazingly, they had the wherewithal to pull the few survivors out of the water – an awful and morbid scene.

“There was one man who asked for help. I reached and got his hand. I pulled him up, thinking I would take him up on the island, and when I got him out of the water, I looked, and nothing beneath his belly button was there. Everything was gone,” Heckman remembered. “I held him there for about two minutes until he passed away, and then I let him slide back into the water.”

Many military nurses also survived the attacks on Oahu, yet we don’t hear their stories as often. These women were pioneers of their time who faced stringent rules when they enlisted and took care of a lot of patients in the days following the attack.

Many of these women refused to share their stories with their families in the decades after the war, but a few finally did toward the end of their lives. They’re stories their families now share with the public to remind America of our lesser-known heroes of war.

This article was written by Katie Lange for Defense Media Activity