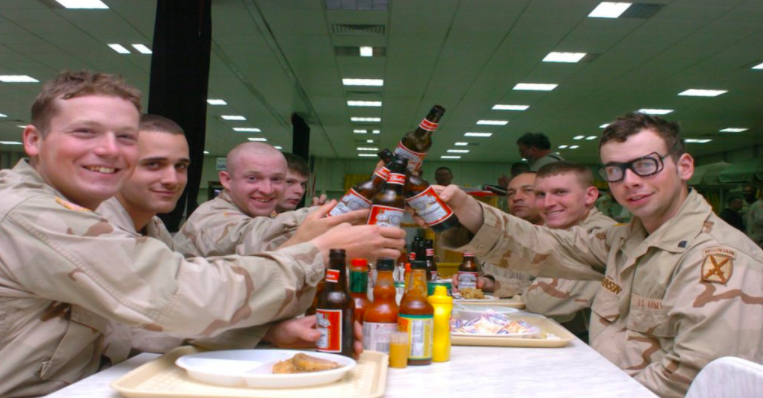 The sun is shining, the birds are chirping, and crust adorns your bright eyes as you open them to your earliest taste of freedom. Your room is decked out according to how you want it and what mommy and daddy say or think is no longer the deciding factor in what you will or won’t do for the day.

This day could easily belong either to Private Joe from Anytown, America or Johnny Freshman in any university dorm. There are some surprising similarities between those earliest days in the military and the typical freshman year of college.

Related: 8 reasons being in the military is like being in a sorority

When you first encounter military instructors, as a military member, it is anything but pleasant.

Go this way! Go that way! Pick it up! Put it down!

Add that to the fact that you have zero idea where you’re going (and sometimes even where you’re coming from) and confusion is the only real outcome.

Pictured: The inside of a first-year service member’s mind (Photo from The Odyssey Online).

6. You have no idea what to do now that you’re away from home

The first time away from home can be extremely frightening for many. Even if your parents and/or guardians empowered you with freedom and responsibility, chances are that going to college or joining the military is your first time being away from home in a real way.

This isn’t taking a break for a few days or weeks, you have left the nest and flying solo can be scary.

Newness is very exciting but it also carries a certain measure of suck.

No disrespect to any fraternity or sorority, but actual military boot camp is one of the toughest things anyone will ever do, but there are similarities to rushing. There is information cramming, adapting to a new culture, an embarrassing haircut, frowned-upon hazing, and the list goes on.

Truthfully, the brotherhood of arms is very much a fraternity for some and a sorority for others. Our letters aren’t Greek but they do all start with “U.S.”

You thought they were just going to “let” you in? Nah, you have to earn it! (Photo from Letter Pile).

The only way to avoid time in a dorm room is getting married but, chances are, being fresh to the military means you aren’t ready for marriage. That doesn’t stop many young troops from walking down the aisle, but I digress…

Regardless of which service you join, the early stages of your enlistment will involve some type of dorm life. You simply can’t avoid it.

The look you make when you thought you got your own dorm room. Should’ve joined the Air Force. ( Photo from YouTube | Jon Richie)

Besides the Marines, no other service as a whole just stays in shape. Every single service has physical training programs, sure, but not every branch will ride you and expect you to stay in the same shape you achieved in basic/boot.

This makes gaining weight too easy. Even if you adhere to the same standards training-wise, the availability of good eats can lead to a military version of the infamous “freshman 15.”

Trust me, it’s not that hard to get out of shape (Photo from Gawker).

Yes, as a military member, you end up shouldering a lot of weight that most civilian teenagers wouldn’t. There is no denying that.

There is also no denying that a dorm party in the military looks a lot like a dorm party in college. There are kegs, there are guys and girls, there are food platters, and there are a lot of people alternating between throwing up and turning up. You know what there isn’t a lot of, though? Anyone checking identification!

Although it’s a rampant and completely normalized part of early enlisted life, underage drinking is 100% illegal in America and is a punishable offense.

A little early for a drink, Timmy (Photo from The Telegraph)

Also Read: 6 reasons being E-4(ish) mafia is the best

Eventually, you learn your way and you become who you’ll be. Now, I’m not saying this happens by the end of that first year, but it does happen after some time. Until then, life is basically a series of hard knocks, adaptations, and semi-pleasant surprises.

It works out for most of us… well, for some of us.

You’ll get there, hopefully, one day (Photo from Minnesota National Guard).