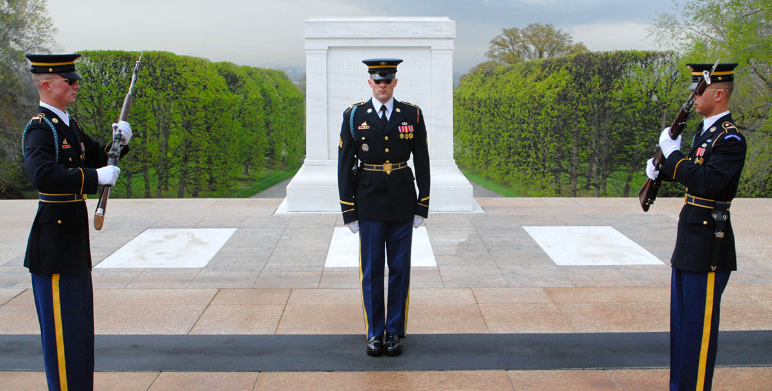 One of the greatest tragedies of war is when a troop falls and is lost amidst the chaos of combat — the troop’s body, for whatever reason, cannot be properly identified. Anonymous troops who have fallen in some of America’s greatest wars are interred within a tomb to honor those unaccounted for.

Every year, approximately four million people travel to Arlington National Cemetery to pay their respects to these men and women. Most gather in solemn awe as they watch the proceedings at The Tomb of the Unknown Soldier, which stands atop a hill overlooking Washington, D.C.

Highly-trained Tomb Sentinels protect every inch of the hallowed ground, 24 hours a day. Although the site is rich with history and tradition, there are many facts about the Tomb that most don’t know.

In March of 1921, Congress approved a plan to return an unknown soldier from the first World War, burying him with full honors in a tomb at the memorial amphitheater in Arlington.

On Memorial Day of that same year, four American troops were exhumed from cemeteries in France. The deceased were placed in four identical caskets and placed in front of Army sergeant and World War I veteran, Edward F. Younger, who was wounded in combat and given the distinct opportunity of choosing the first unknown soldier to be buried.

At the chapel, Younger paced around the caskets, holding roses. The coffin upon which he placed the roses was his choice. He made his selection and the casket sent back home aboard USS Olympia and buried at Arlington. The others remained in France and were transported to the Meuse-Argonne Cemetery and laid to rest.

After the end of World War II, it was time to begin the selection process anew in order to honor those who fell. Unfortunately, the Korean war had also reared its ugly head, postponing the process. It wasn’t until 1958 that proceedings resumed.

On May 15, 1958, four unknown heroes were placed in identical caskets before Master Sgt. Ned Lyle, a Distinguished Service Cross recipient who had proved his valor in Korea. It was up to him to select the soldier to be entombed and represent those lost in the Korean War.

The decorated master sergeant placed a wreath atop his selection, followed by an honorary hand salute.

The third unknown soldier, who would symbolize those lost in World War II, was selected aboard the USS Canberra just 11 days later. Hospital corpsman and Medal of Honor-recipient William R. Charette made the final selection.

Two unknowns were presented to Charette — one from the Pacific theater, the other from the European. The selected casket was returned to Arlington and the other was given an honorable burial at sea.

The unknown soldiers from World War II and the Korean War were placed into the tomb at the same time.

The Unknown soldier from the Vietnam War was selected by Medal of Honor-recipient Sgt. Maj. Allan Jay Kellogg Jr. during a military ceremony at Pearl Harbor in 1984. The Unknown arrived at Arlington National Cemetery on Memorial Day, May 28, 1984.

President Ronald Reagan presided over the funeral and awarded the Unknown with the Medal of Honor.

In 1998, the body was exhumed and the DNA was tested. The body was later be identified as Air Force 1st Lt. Michael Joseph Blassie, who was shot down in Vietnam, 1972.

On the east-facing are three Greek figures, representing peace, victory, and valor.

In April 1948, the 3rd US Infantry Regiment proudly took on the responsibility of guarding the tomb 24 hours day. The guard changes every 30 minutes during the hot summer and every hour during the cold winter.

Those who wish to become a Sentinel are hand-picked and undergo strict training. 60 percent of the hopefuls will not graduate the rigorous program.