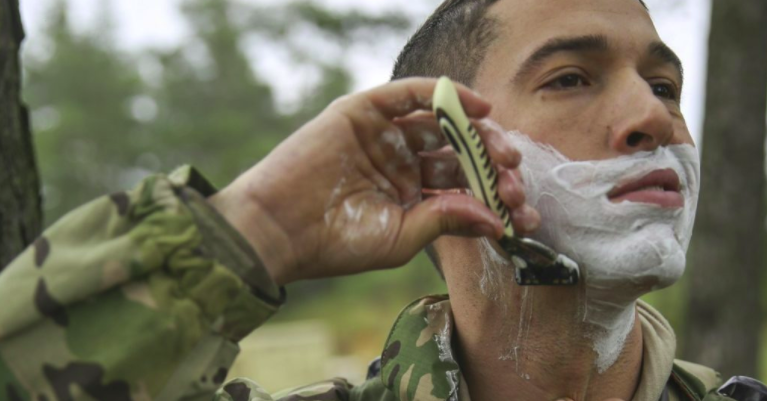 The U.S. Military is full of rules and regulations, so much so that it gives the lower enlisted plenty to complain about. But some of the things that seem like annoying POG tasks actually make a lot of sense and, in some cases, could be lifesaving.

Here are some of the tasks service members complain about doing that, realistically, make good sense.

Related: 6 ways to be successful in the Marine infantry

This often feels like an annoying task only POGs worry about but, when you think about it, the purpose is to keep dirt and other unwanted particles from getting inside one’s boot.

It gets stupid, though, when higher-ups prefer to see them sit near or at the top of the boot, which may look good, but ultimately defeats the purpose.

Airmen don’t really have to worry about dirt getting in their boots, though. (Image via Citizen Airman Magazine)

4. Buckling the chin strap of a helmet

When troops of the modern age wear their combat gear, they like to call back to times of World War II and Vietnam, when troops would go on patrols with the chin strap of their helmets unbuckled.

But, when you look at why those troops did that, it becomes clear that, with the modern helmets and straps, it makes more sense to buckle up.

Would you rather be comfortable and lose your helmet or have something to protect your head from incoming shrapnel? (Image via Reddit user 4noteprogression)

This is the practice of picking up every little piece of trash in front of the battalion headquarters until it looks pretty for the base commander — what a beautiful practice. After all, who doesn’t like standing in a straight line and combing the lawn for used gum and cigarette butts? But, when you think about it, this is good practice for when you’re leaving a bivouac site or sleeping area.

You want to pick up every piece of trash — yes, even the gum and cigarette butts — to make sure there’s little to no evidence of human occupation because it makes your unit harder to track.

Remember, if you bring it in, you take it out. (Image via Duffleblog)

This is a common complaint because everyone just wants to be an operator. But the truth is, having a clean shave can save your life. The requirement started during World War I to ensure a perfect seal when the gas masks go on to prevent, you know, dying from a cloud of mustard gas.

These days, having a clean shave is a part of military uniformity and discipline. It takes some discipline to wake up and shave every morning and takes no effort to just let it grow.

On the other hand, special operators are allowed to grow beards because they’re immune to chemical weapons and don’t need gas masks.

Also read: 6 easy ways for a grunt to be accepted by POGs

No one likes being woken up half an hour before the sun rises to stand guard but, realistically, these are the times where attacks have been known to happen. The enemy likes to strike when you’re either focused on going to bed or getting up.

READ NEXT: THE ORIGIN OF THE MARINES ‘OO-RAH’ BATTLE CRY