5 Reasons Why You Gotta Love the Combat Mustache 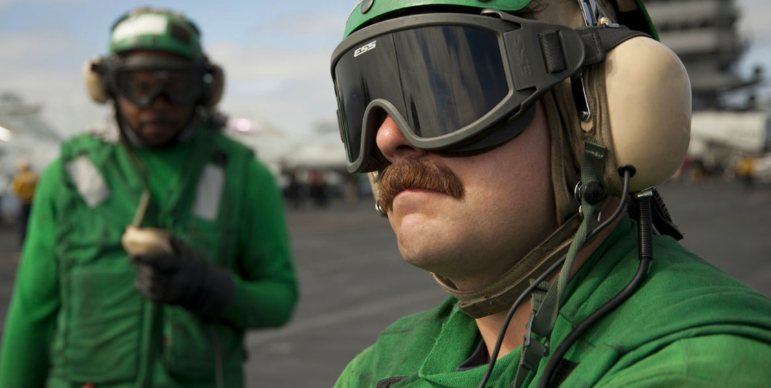 There comes a point in nearly every deployment where troops get so bored out of their minds that they try anything to stay entertained. One of the most time-honored traditions while deployed is for troops to try walking on the mustached side of life. It’s the perfect place for it, too — away from the judging eyes of friends, family, and significant others.

Back in the day, troops could rock whatever facial hair they felt comfortable in. Over time, regulations changed and, in the 20th century, the wearing of beards was banned service-wide, affecting nearly all U.S. troops. The mustache, however, has been allowed to remain as long as it falls within strict guidelines.

To be honest, most guys can’t pull it off. But for those majestic few that can — the word ‘glorious’ doesn’t even begin to describe it.

Here’re the top reasons why you must respect the combat ‘stache.

1. They’re one of the last bits of personal freedom that troops can wear

Troops seldom get a chance to sport any kind of individuality while in uniform. That’s kind of the purpose of uniformity. Most times, they can’t even decide on which of the three authorized hairstyles to sport: bald, buzzed, or high and tight.

Adding a layer of “mustache or no mustache” to that list makes you feel like you’ve got some sort of individuality left.

Every single time a troop shaves their face, the eternal debate rages anew.

2. They show you take pride in your apperance

Anyone can take a razor to their face in the morning and be done with it. It takes someone who’s really invested in their ‘stache to go the extra mile and groom it to standards. As much as everyone would love to rock the Sam Elliott, Uncle Sam says no.

While each branch has slightly different mustaches regulations, in general, troops have to keep it professional and proper. Believe it or not, it takes skill to make a mustache not look like a high schooler’s poor attempt of whiskers.

3. They’ve been worn by many of America’s greatest warfighters

Gen. “Black Jack” Pershing, Col. Robin Olds, Col. Teddy Roosevelt, Col. Lewis Millett, Sgt. Alvin York, and probably the drill instructor who first showed you how terrifying a knifehand can be all had one thing in common: a glorious mustache.

Now, it may not have been the lip fur that made them all heroes, but it couldn’t hurt to channel them through your own.

I think the ghost of Colonel Olds just shed a single manly tear over this nose art.

4. They tend to an NCO’s intimidation factor

Drill sergeants are terrifying on their own. When your drill sergeant has a mustache above his snarl, you know you’re in deep sh*t. This also works for nearly every other NCO in the military. The motor sergeant? Hell no. You’ll do your own 10-level work. Medic? You’re fine with just ibuprofen and water. Supply sergeant? Yeah, you’re going to fill everything out in triplicate.

The only way for this to not work is if their mustache starts growing in like Worf’s from Star Trek. Then it just becomes too silly to take seriously.

Seeing a mustache like this means you’re 150% more likely to be dropped and have to do push-ups.

5. They’re a fun way to prove manliness among your peers

The military runs on pissing contests. If you can objectively put a qualitative number to anything, you can be sure that troops will find a way to measure themselves against their peers.

If you can grow a full Bert Reynolds, right on! You’re manly enough to keep it. If your unworthy display of peach fuzz barely grows in after a month, you’re justifiably going to be mocked.

If you thought this was just for fun, you are dead wrong! This is not a game!

READ NEXT: THAT TIME AN AIR FORCE PILOT SAVED A UNITED AIRLINES FLIGHT

Article Name
5 Reasons Why You Gotta Love the Combat 'Stache
Description
Military grooming standards have changed a lot over the years. You used to be able to don whatever facial hair you want. Not anymore. The combat mustache remains a staple though.
Author
Eric Mizarski
Publisher Name
We Are The Mighty