5 Items Essential to Any Deployment 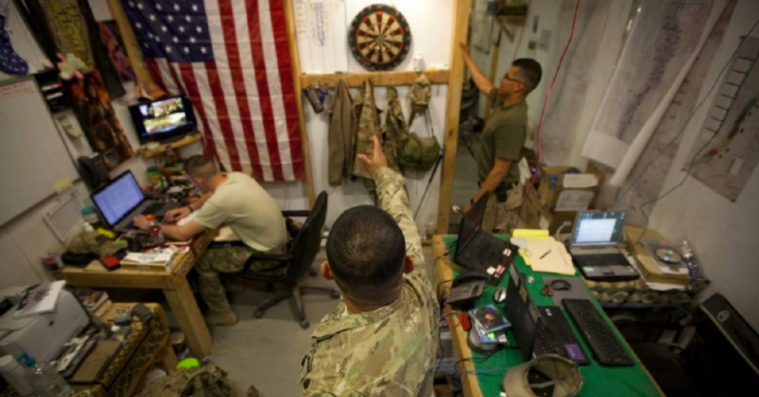 Getting snacks and coffee via care packages is nice, but sometimes what you really need is a little personal space in the middle of a war zone.

Depending on your rank and branch of service, you get more luxuries. The standard grunt in the formation, however, gets a bunk and a foot or two of space that you share with everyone else in your tiny tent.

Here are the little ways troops try to make their bunk their own, despite the conditions.

There’s basically nothing to do on your downtime while deployed. Shocker, I know.

When you’re trying to set up your “space,” you’ll need more storage than just your duffle bag.

Tough boxes serve multiple purposes in addition to being a place for all your crap: Table, desk, chair, an end table to place family photos, a divider to cordon off your side of the tent — whatever’s clever.

And they’re perfect for the return back stateside! (Photo by Spc. Zane Craig)

It’s not just the combat cameramen who get into photography while deployed. Plenty of troops take photos so they can try to make the “most perfect deployment video ever!”

Every photo is basically just the guys hanging out — an average day while doing military stuff. Rarely do troops capture the awesome combat videos they dream up. If you do, the CO will scrub it down. If they don’t, you’ll probably put “Bodies” by Drowning Pool in the background.

Or Metallica… or Godsmack… or Toby Keith… (Photo by Staff Sgt. Ryan Crane)

POGs probably won’t set them up, but once someone in the unit grabs some extra wood to create an easy set-up for their armor, everyone else will follow suit.

All it takes is some spare 2x4s. Make ’em into a cross, give it a base, and you can easily grab your gear when it’s time to make a gun run.

Perfect for the grunt on the move.

The same exact chairs you’ll see covering the sandy beaches of the States are also everywhere in GI tents in Iraq and Afghanistan.

These are cheap as hell, and yet troops will still sit on the same broken-down chair they bought off the unit before them.

Article Name
5 Items Essential to Any Deployment
Description
Military deployment can be a stressful time, which is obvious. But troops will bring anything with them, within reason, to ease the stress. Here are 5 items essential to any deployment.
Author
Eric Milzarski
Publisher Name
We Are The Mighty