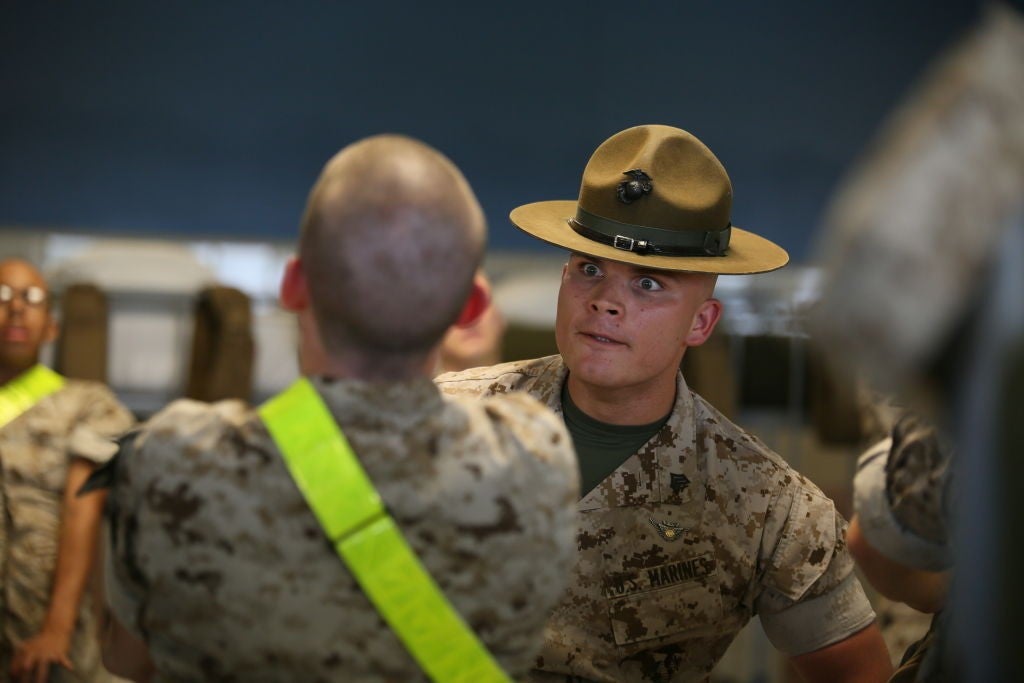 Far from just marching around and being yelled at by sadistic drill sergeants, basic training can be the source of hilarious stories.

Case in point comes from an awesome AskReddit thread. The thread, which originated with Reddit user mctugmutton, asked the military community for “the funniest thing they witnessed while in boot camp.” The answers run from LOL to LMFAO and glimpse at basic training differences between service branches.

Reddit user sneego: The time half my squad decided to clean their training gear naked.

Our last week of basic training, we basically spent days cleaning all of our TA-50 (pretty much all your issued gear- rucksacks, ponchos, etc).

The drill sergeants decided it would be more efficient for us to pile up some of the major items as a platoon and organize cleaning teams. Well, the cleaning team in charge of doing ponchos decided to use the showers to make things go faster and to free up the faucets in the laundry room for others to use. So they begin cleaning and then decide to go one step further: Why be careful about getting wet when you can just get naked and get things done even quicker?

Next thing you know, half of first squad is butt naked chatting like nothing unusual is going on when our drill sergeant walks in. The DS just looks in, makes a David Silvermanesque WTF look, says in his thick Puerto Rican accent, “Jesus LORD privates, what the F–K!” and walks out.

Reddit user allhailzorp: The time my friend got an imaginary bathroom siren.

Not me, but my best friend who recently went through USMC boot camp.

It’s about Week 2. All the recruits are still scared s–tless. Literally, some of their a–holes are clenched so tight they haven’t gone number two since they got there. And by this point, with Marine chow being what it is, there’s quite a backlog building up. My buddy desperately needs to go. He wanted to wait until his individual time that night, but it was too late, he was touching cloth.

So, braving his fear of the DIs, he speaks out. “Sir, this recruit requests a head call, SIR”. Then, he blurts out, “Sir, it’s an emergency, Sir!”

The DI, with his infinite sense of humor:

“Oh really? An emergency huh? Well, you better put on your SIREN.”

My buddy has to wave his hands above his head, and scream “Bee-Boo Bee-Boo” as he ran to the restroom. This continued for the entirety of boot camp, every time he needed the bathroom.

We had a really pasty kid with huge coke bottle glasses with a really high pitched almost robotic voice in our flight that seemed to be a lightning rod for TI abuse.

One morning our TI told the kid that he was on to him and he wasn’t going to allow him to complete his mission. Suffice to say the kid was extremely confused and asked the TI what he was talking about to which he replied “You’re an alien and I know you’re here to gather intelligence about our military.”

At this point, I couldn’t hold in my laughter any longer and went to the other side of the barracks as quick as possible before I got dragged into it. Well, I just got to the other side when the kid comes barreling around the corner and stops right in front of his locker and starts screaming into it that the TI was on to him and that the mission was unsuccessful.

I guess the TI told him that he had to report to the mothership through the communicator in his locker that the mission was unsuccessful and he’d been found out.

From Dan Caddy, author of Awesome Sh*t My Drill Sergeant Said: The time the DS found a Chinese boy in a wall locker. (Not in the book)

My Basic Training Battery had twin brothers in it, Chang L , and Chang K . Chang L was in fourth platoon and his brother was in third. One evening, there were combatives happening in the fourth platoon barracks. Chang K had sneaked into our bay to be a part of this unsanctioned event, specifically so that he could wrestle his brother. Everyone was wearing PT uniforms, except for some reason our Chang, who was wearing nothing but his issued brown briefs, and had removed his glasses for the fight. Suddenly, a wild Drill Sergeant appeared! Chang L, in his underwear, was grabbed by someone and stuffed into their wall locker.

His twin brother, Chang K, ran up to the front of the bay to take his brothers place for mail call. It was a disaster waiting to happen. After mail was handed out, the Drill Sergeant decided to hang around for a bit and have a serious heart to heart talk with us about something that had happened recently (an attempted suicide). The Drill Sergeant had gathered us close and was quietly talking about loyalty and brotherhood when all of the sudden, he was interrupted by the metallic squeal of a wall locker opening.

There was a hushed silence as the skinny little Chinese man, blind without his glasses, peeked out around the door and stepped out, in plain view of the Drill Sergeant. Apparently, we had been so quiet, that he thought we had all left.

DS: “WHY IN THE F–K IS THERE A NAKED CHINESE BOY IN YOUR WALL LOCKER?!”
Pvt 1:”Drill Sergeant, I put him there, Drill Sergeant!”
DS: What the f–k?
Pvt 2: “We were wrasslin’, Drill Sergeant.” It was silent for a few seconds as the DS’s face contorted as though he were about to have an epileptic seizure. His eyes were cartoonishly huge.

The DS pointed at the practically nude Chang L and screamed at him to get his f–king ass over to the third platoon barracks. Chang L started to interject, presumably to inform the DS that he had confused him for his brother, but was unable to finish because at this point the DS was knocking things over and screaming his lungs out. Chang ran away, blind and naked, stumbling into furniture as he fled, leaving his terrified twin brother in his place. I don’t believe that we actually got our Chang back until PT the next morning, when they were able to switch back.

Get Awesome Sh*t My Drill Sergeant Said via Amazon or Barnes and Noble locations nationwide.