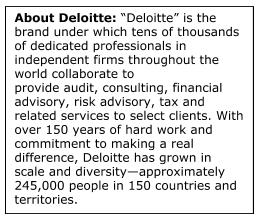 Many military spouses gravitate toward careers at Deloitte due to the competitive yet flexible work options. Deloitte’s locations at XX offices across the US and ecosystem of roles enable military spouses to have options when undergoing military-ordered moves.  However, a formal process for consistently—and unexpectedly—moving was absent.

As a result, an informal network of military spouses organically grew and leaned on each other when transferring cities, offices, and positions.

Deloitte’s inclusive culture, agile workforce, and demonstrated support for the veteran community served as a platform for the Military Spouse Initiative (MSI) to emerge. A group of Deloitte employees who were military spouses developed a four-tiered approach to attract and retain military spouses: transfer assistance, professional development offerings, talent (HR) awareness, and targeted recruiting.  Once implemented, military spouses were formally onboarded, connected, and transferred and Deloitte benefited from an expanding and dynamic pool of military spouse employees.

Each of these four focus areas were presented to leaders in the business and strategically integrated into Deloitte’s culture in the following ways: 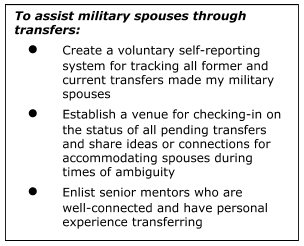 Transfer Assistance: To ease internal transfers resulting from government-ordered moves, the Military Spouse Ambassador Program (MSAP) develops and disseminates transfer guidance materials and provides personal mentors for transitioning military spouses. During the months before and after an anticipated transfer, they are connected with a Military Spouse Ambassador (MSA). When a Deloitte transfer is unable to be supported, military spouses are offered job search support for opportunities outside of Deloitte. 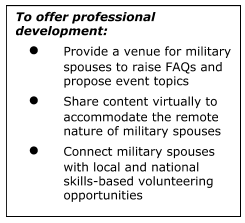 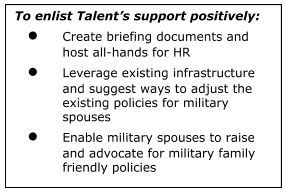 Talent (HR) Awareness: Deloitte’s Talent organization is engaged when an individual relocates. MSI reviewed existing infrastructure and policies to identify areas that Talent could offer support specific to military spouses. When a transfer is occurring due to a military-ordered move, military spouses can now indicate that as a reason for relocation, receive tax filing support, and are assisted by Talent practitioners that are aware of the profile of military spouses.

Deloitte is leading the way in offering support for its military spouses. Through the Military Spouse Initiative, military spouses are able to find support and resources for their careers, and benefiting Deloitte and its clients by bringing their unique perspective and experience to work every day.

About the Author: Cassandra Sullivan is an Organization Transformation & Talent Senior Consultant with Deloitte Consulting LLP. She has managed four military-ordered moves during her three years at Deloitte and co-founded the Military Spouse Initiative when making her first transfer. Alongside her client service, she serves as the Program Manager for MSI and works out of Deloitte’s office in Seattle, WA; she previously worked in offices in New York City, NY, Atlanta, GA, San Francisco, CA, and Washington, DC. Her husband graduated from the U.S. Naval Academy in 2015 and is currently serving as a Submarine Officer.