250 Wardrobe Changes of Our Trusted Friend 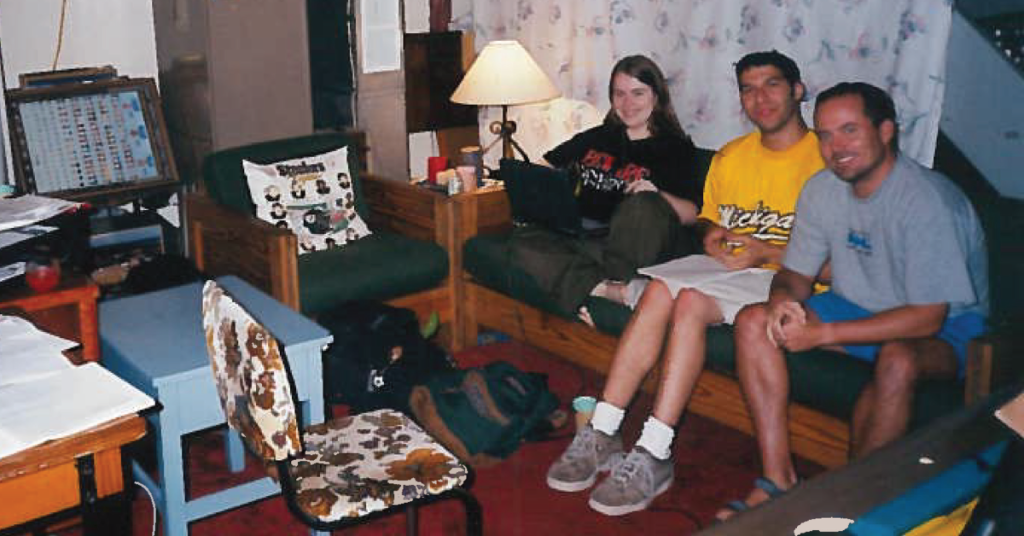 Funny how working in one’s basement has come full circle. Now it’s desirable. But when we started G.I. Jobs in the summer of 2001, lack of office space meant it was hard to take your company seriously.

Our “corporate address” was 208 Parliament Drive. Sounds like a four-bedroom, 2.5-bathroom home on a cul-de-sac doesn’t it? Not legit. In fact, the basement in my house which served as our corporate HQ for the first year or so wasn’t just a basement. It was a “Pittsburgh” basement, complete with concrete floors, exposed air ducts, desks right next to the hot water heater and, of course, a free-standing Pittsburgh potty.

Adding “Suite B” to our corporate address was necessary to help the mailman deliver to the suite in the Basement instead of the first floor:) Didn’t hurt that it made us look like we had real office space too.

Rich McCormack, Jonathan Fobear and myself were sitting in Suite B one day that summer of 2001, brainstorming names for our new magazine on a whiteboard when Rich blurted out “G.I. Jobs.” The rest of us stopped talking. We had found her name.

By the time we published our first issue later that fall, the day that would change the course of history had just happened. We were starting a business that was dependent on companies paying to run employment advertising.

Pretty much every prospective employer gave us the same answer: “The reason I am not going to pay for employment advertising right now isn’t because I don’t have any job openings. It’s because I’m laying people off in droves!”

The first issue of G.I. Jobs was pretty sparse of advertising, but it was a 9/11 tribute with Army veteran and then-NYPD police chief Bernard Kerik gracing our cover. That was a big editorial get back then!

Needless to say, our timing couldn’t have been worse. But what we lacked in timing, we made up for in grit. After all, when you start on the bottom, you have nowhere to go but up. And from the storm of 9/11, G.I. Jobs rose.

Twenty million copies of G.I. Jobs magazine over 21 years have been printed and distributed to every corner of the Earth, including forward deployed troops in Afghanistan and submarine sailors hundreds of feet beneath the South China Sea.

G.I. Jobs articles have been read hundreds of millions of times on digital devices across the globe.

To the tens of millions of veterans who didn’t know how their military skills translated into civilian jobs, who doubted their ability to succeed in the private sector and who needed support during a super-stressful time, G.I. Jobs has been a trusted friend.

To the veterans who didn’t know how to write a resume or how to act or dress in a job interview, G.I. Jobs was the coach who showed them how it was done.

To the veterans who didn’t know how to act in their new corporate culture, G.I. Jobs was the civilian drill sergeant who whipped them into corporate shape.

To the veterans who didn’t know what color their parachute was, G.I. Jobs was the mentor who highlighted those like them who went before, and showed their path to civilian success.

To those veterans who were told by civilian recruiters that five or 25 years of service didn’t count as work experience, who were only considered for entry level jobs or who were discriminated against because they were viewed as too rigid or too risky, G.I. Jobs was the inspirational leader who sold your value to the corporate sector.

And that last role, as advocate, is perhaps where I’m most proud of her. Corporate military hiring programs were at best a recreational activity until G.I. Jobs put a scoreboard on the field in 2003. She named that scoreboard Military Friendly®.

That scoreboard showcased how the few companies that were recruiting veterans were doing it; and how well they did it. Others followed. And in only a few short years, a competitive sport replaced that recreational activity. G.I. Jobs got corporate America and higher ed to up their game for the military community and to compete to bring veterans into their organizations. The industry that exists now and the veterans transitioning today owe a lot to her for expanding this industry. Talk about advocacy.

As we celebrate 250 issues more than 21 years after its inception, I’m struck by the longevity of this revered brand. Internet blogs, social media followers and cheap broadband took away the distribution barriers and enabled anyone with an opinion to be a journalist. And today, there are plenty of them out there. But G.I. Jobs remains the trusted friend, the coach, the corporate drill sergeant, the mentor and the servant leader it has always been.

I am so appreciative of our people who worked so hard every month to inspire you to live your best civilian life. I am grateful to our advertisers who invest in advertising because they know how valuable you are to their organizations. And I thank you, our readers, who have blessed us with your loyalty for 250 issues. Here’s to 250 more!