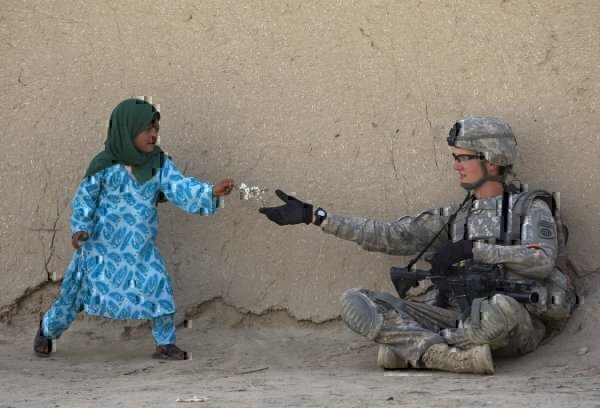 Yesterday we asked veterans to recall their happiest/funniest/most rewarding moments during their time served. We got some really great stories, and it only makes us appreciate you guys more. Thank you for all you do.

“One thing I will never forget is the “Hug Lady” at Fort Hood. I deployed twice, and was present many times as soldiers came through the airport. She was ALWAYS there greeting the troops!!”

“So a few years ago I was injured pretty bad during a mortar attack. Anyway, when I woke up I was on a plane and apparently had been crying in my incapacitated state. Some Afghan dude, I’m assuming an interpreter, who I’d never met was singing some kind of Afghan lullaby until I fell back to sleep. Never saw the guy again, but I’ll never forget.

“Using stripper names as our call signs over our internal frequency on my 2nd deployment. It’s the little things.”

“I was honored to work in USAF Special Ops Flight Test my last 5 years. The moment that always stood out for me was between legs on a mission… we’d be sitting on the ramp of a C-130, watching the world underneath us. I was chatting with the Load Master or other teammates; it was so dangerous, yet so natural.”

“Back in 2005 i was deployed to Baghdad. One day we were on patrol and when we stopped for a breather, a little girl came over to where I was with flowers. She handed me the flowers and in broken English Said “thank you”… I reached in my pack and gave the little girl a MRE…The smile on her face was priceless..It restored hope in what I was doing.”

“Being in Iraq, in the middle of nowhere, and looking up at the sky at night. I didn’t even know the sky is as beautiful as it is.”

“Best part was my unit. We were together for four years, and as a trauma surgical unit it showed. We saved so many lives that they revised the SOP for our unit type. We had a 99.7% save rate in a year long deployment.The family we made still extends past that, as we went through some terrible things together. Even now though, I know I can still call on them if I need help or just a brother/ sister to talk to.”

“On my first ship stationed in Japan a guy in my division got married on leave just before checking into the command. Cause of all the paperwork and red tape it took about a year for him to move her over there. On a visit before she moved she got pregnant… fast forward a few months she didnt have time to make many friends and was sad she wouldn’t have a baby shower for her first child.

So all the guys and lone girl in the division plus a few others from the ship threw her a surprise baby shower. She cried tears of joy for more than 5 minutes.”

“Being in the Philippines during Christmas, and buying a HUGE box full of flip flops and handing them out to the locals on Christmas Day. Most had no shoes.”

“A contractor that worked with us rescued a puppy from the streets of Baghdad after its mother had been killed. It had been sitting by her body for a day or two. For anyone that doesn’t know, you’re not supposed to have pets or mascots (other than military working dogs). The puppy had to be snuck back onto the FOB, but let’s be honest, there was no way that puppy was going to be left there.”

“Being in Iraq and seeing the people’s excitement over being able to vote for the first time in decades.”

“First tour in Iraq, I learned one of the greatest lessons of my life. I was a medic assigned to a combat engineer platoon and we were doing IED patrols in Mogul. We crossed this bridge over a ravine. I looked over and saw a pipe spilling raw sewage into the ravine which flowed into the Tigris river.

In the middle of this shit spill was the biggest rose bush I had ever seen. The blooms were the size of my head. Moral of the story: sometimes the biggest and most beautiful roses grow in the worst shit.”

“Deployed to Afghanistan in 2013. I had to figure out what was wrong with our jet before we had to scrub the mission. I was the only troubleshooter out there at the time. I worked on it for about 20 minutes to half an hour and I had to sprint the entire flight deck to get the part that I needed to fix it.

With literally one minute before shut down I was able to get it to the catapult and launch it out. On the way to the catapult the pilot held a price of paper up to the canopy and I ran over to read it thinking there was another problem, it read “‘you are a bad motherf***er.’”

“Hands down, one of the greatest things about going through all the CIFs, all the training, and all the deployments is actually the bigger and stronger community you walk into when you take your uniform off for the last time. Good god, I thought being in the Army was a tight knit community- it’s nothing compared to the Veteran Brotherhood I am now an honored member of. We can pick each other out in a crowd, and are never alone as long as we find someone (regardless of age, rank, branch of service, or wars fought). Most exclusive damn club I’ve ever had the great fortune and pleasure of joining.”

“I was a medic stationed at Fort Hood. We were covering a Special Olympics event being held there. I remember Jim, a special needs Olympian. He was so scared that he wouldn’t do well. I sat with him, gave him encouraging words, and listened while he prayed. At the end of his race, he fell just as he passed the tape. I ran over to him to make sure he was okay. He was crying, and I thought he was hurt. He wasn’t! He was crying because he thought he lost. He didn’t. He won!

When I informed him of that, he gave me the biggest hug! He also insisted that I stand with him at the “Winner’s Podium.” I obliged by standing behind him so as not to take away from his moment. I will never forget his tears of joy!”

One of the coolest experiences I had in the military was driving through the desert in Saudi Arabia when the clock struck Midnight on the New Year’s Eve of the millennium. Everyone was worried about Y2K before we left. It was pitch black except for the dash lights and the glow of Kings highway off in the distance. The whole world could have been melting down but we would have never known it.

“We were on a foot patrol and a woman very slowly approached us. She had a look on her face which at first made us all really edgy, thinking she was a suicide bomber. After securing her and making sure she wasn’t a threat, she said through our interpreter that she had lost her husband and two sons to Saddam’s regime. She had come up to us because she wanted to hug and kiss the men that had brought the justice she had been seeking for years.

She told us we were all about her deceased son’s ages, and that she would ask Allah to protect us and comfort our mothers so that they wouldn’t feel what she felt. She thanked us once more, and slowly walked away. It was the most beautiful moment possible in absolute hell-hole and still puts a lump in my throat.”

“Back in 2011, I was TDY to Sigonella NAS (as a C-130 aircrew member). Most nights we would cook down at the barbecue pit and drink heavily. I remember one night Mount Etna started erupting, so we found a way to climb up on the roof of the on-base hotel (a.k.a. billeting) and watch the lava show.”

“My first duty station when I was active duty Air Force was at RAF Mildenhall. I was aircraft maintenance at the time and each year half of the shop had off for the week of Christmas and the other half had off for the week of New Years. My 2nd year over there I had the week of Christmas off and, since I wasn’t going home on leave, I decided to go to Paris for a 3-night/4-day trip. Looking out over the city of Paris from the Eiffel Tower on Christmas night is something I’ll never forget.”

This article originally appeared on TheChive.com

READ NEXT: 16 Military Memes Only Veterans Will Understand.