The 10 Deadliest Jobs in the US 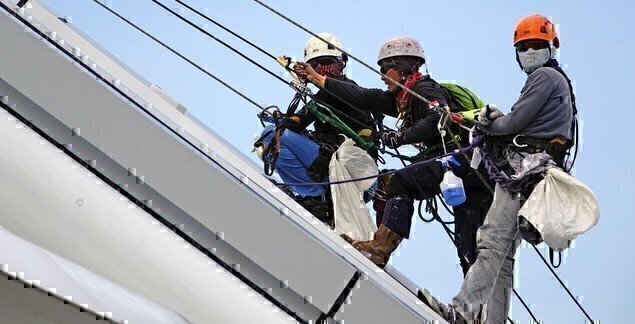 Would you consider another high-risk occupation after you leave the military?

Preliminary figures from the Census of Fatal Occupational Injuries (CFOI) show a total of 4,405 fatal work injuries recorded in the United States in 2013. While this overall number decreased from the previous year, these stateside jobs still have the label of being America’s most dangerous jobs:

Logging workers continue to be ranked high on the list of fatal occupations, with 59 fatal work injuries in 2013. According to the Occupational Safety & Health Administration (OSHA), logging is so dangerous because of the tools and equipment loggers use, along with the massive weights and the momentum of falling and rolling trees and logs. The combination of rough terrain, bad weather and isolated work sites lands this job at the number one spot.

Not into logging? How about taking a job aboard a commercial fishing vessel? The number of fatalities for fishers and related fishing workers decreased from the previous year, but this profession has been historically unsafe for the brave men and women who haul up heavy equipment even in harsh weather.

According to the Bureau of Labor Statistics (BLS), aircraft pilots and flight engineers are next up on the list of most dangerous jobs. It’s important to remember that this grouping includes not only airline pilots but those pilots who fly small private planes, like bush pilots and crop dusters, along with instructional pilots. While it is one of the higher-paying professions on the most dangerous jobs list, these aviation professionals are also high on the danger meter.

Roofers and garbage collectors take the fourth and fifth spots, according to the CFOI. Hot tar and falls from high places make roofers an obvious choice on the list. But why garbage collectors? These men and women are exposed to heavy equipment meant to crush the stuff they pick up. Americans also tend to dump potentially explosive materials into their trash. This combination of dangerous conditions means there were over 100 fatalities in these two professions in 2013.

Going deep into the earth seems like a recipe for problems, so it’s no surprise that mining machine operators made the top 10. This historically dangerous job has seen increased regulations and training over the years, but there is no denying that the heavy equipment these miners operate put them at substantial risk.

With 748 fatal work injuries in 2013, driver/sales workers and truck drivers account for more than three out of every five fatal injuries in the transportation and material moving sector. They have the most fatalities on the list, but due to the sheer volume of workers only come in seventh on the list of most dangerous jobs.

What three professions take the bottom spots? As with many of the other occupations on this list, for farmers and ranchers large equipment is a big reason these hard workers get hurt on the job. With the second highest number of fatalities, this is one profession many still love. Electrical power-line installers and repairers, along with construction laborers, suffer many falls when it comes to getting their job done. In fact, construction took the number one spot in the number of total fatal occupational injuries, but the sheer number of people in the profession means a smaller percentage of overall fatalities than those higher on the list.

But wait! What about police and firefighters? And what about the military? Don’t they belong on the list of most dangerous jobs?

Fighting crime and fires are dangerous jobs, but since fatal work injury rates are calculated per 100,000 full-time workers, the CFOI can skew toward dangerous jobs that have fewer people performing them. In fact, the number of fatal work injuries in the protective service professions was higher by 7 percent in 2013. Fatal injuries among firefighters rose 194 percent from 2012 due, in part, to two large-scale incidents, while law enforcement workers saw a decrease to 97 fatalities in 2013.

And there’s no doubt that being in the military can be dangerous. If the BLS included the number of combat-related deaths in its annual census, being a service member would rank within the top 10 list of occupations with high fatal work injury rates. But these workplace deaths, along with those of contractors and others U.S. workers who are killed overseas, are not counted in the report.