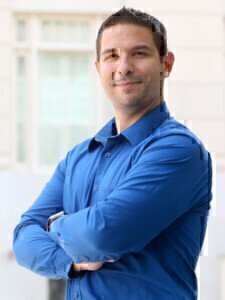 Stephen Hanerfeld, of Swedesboro, New Jersey, says he has been “falling into nuclear” ever since he joined the Navy following high school and tested into the Navy’s nuclear program. Once he left the service, Hanerfeld wanted to become more knowledgeable in the field, so he pursued a Bachelor of Science in Nuclear Engineering Technology with Excelsior College and earned his degree in 2015. Later, he earned an MBA from the College in 2019 to further his career as a corporate oversight manager for PSEG Nuclear LLC. Now, thanks to his degrees, he is well-versed in both the technological and business areas of nuclear engineering.

Usually, people in the nuclear community are more technical in nature, explains Hanerfeld, but in his role, he conducts leadership assessments, provides leadership and team effectiveness feedback to executive and leadership teams, and monitors efficiency and effectiveness of continuous improvement programs. Hanerfeld realized that even though he works in the nuclear field, there are bigger organizational dynamics in play. “There’s me and my team and how they interact with you and your team, and the organization’s team, and how our organization interacts with other people,” he says, adding that it’s all about providing the best customer service possible.

Hanerfeld is no stranger to teams, or to what it takes to get the job done. After nine years in the Navy, Hanerfeld began working at Dominion Energy, based in Waterford, Connecticut, doing electrical maintenance. He also began attending night classes at a community college to obtain a bachelor’s degree, but the schedule didn’t work for him. That’s why, in 2011 when Hanerfeld’s co-worker told him about Excelsior College, he made the switch to online learning. He says Excelsior’s online model of learning fit in with his lifestyle. “Being able to balance collegiate pursuits along with personal and professional life demands proved to be a winning combination for me,” says Hanerfeld.

A plus for Hanerfeld was that he was able to use his GI Bill benefits to attend Excelsior. He remembers how easy it was to apply: “Between having my registration process become streamlined, housing allowances, book allowances, and having the benefit fully cover everything, the GI Bill made me want to pursue additional educational achievement even more than I would have in the absence of the benefit.”

Hanerfeld left Dominion Energy in 2016 and applying his bachelor’s degree, he became a learning programs manager at PSEG Nuclear LLC. In 2018, he transitioned to his current position as a corporate oversight manager and at the same time, decided to return to Excelsior to earn an MBA. “I needed to kind of broaden myself in terms of organizational behavioral type of background to make myself better in my role, and to make me more effective in impacting leadership teams in general,” he says.

Having those two degrees from Excelsior has been beneficial as Hanerfeld has transitioned from the more technological side of nuclear engineering into his organizational effectiveness role. The nuclear engineering technology degree gives him background in the field and the MBA gives him a broad sense of how organizations do business. “Now I’m in this great position where I get to impact leadership teams, determine team effectiveness, and give organizations tips on how to improve and be efficient over long periods of time,” says Hanerfeld.

Hanerfeld says he has a great boss who is interested in his professional development and says he might go back for another degree in the future. And although he knew PSEG Nuclear LLC had a partnership with Excelsior, he didn’t need to use the benefits because his GI Bill took care of everything. He likes knowing that the partnership exists though, should he want to pursue more education in the future. “Knowing that the company has a partnership with the College just makes me feel really good about future promotion, or future educational opportunities,” he says. For now, though, Hanerfeld is happy being in a management role. “One of the more rewarding parts of my job is helping leaders be able to understand that, yes, you can impact people before it results in adverse consequential events,” he says.