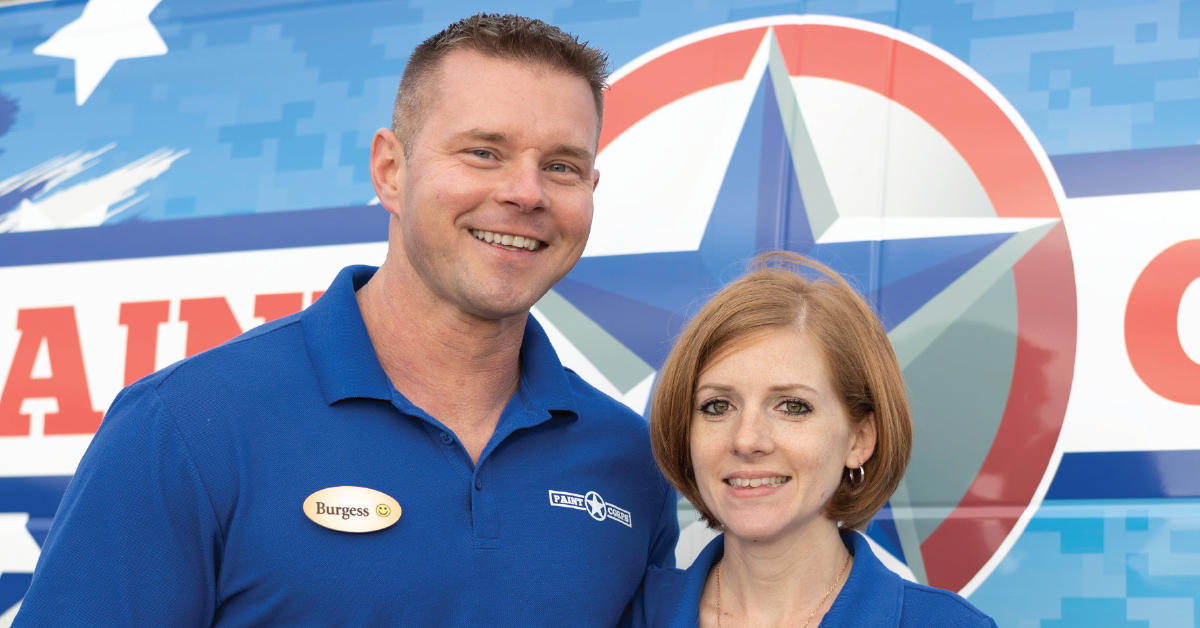 Burgess Perry abandoned a nursing career for franchising. Why you might be the perfect fit to be your own boss.

Service members face the proverbial fork in the road once they decide to leave military service. They must decide whether to continue on the same career path they had while on active duty or to start fresh with something completely new. Each road creates different challenges for life after service.

Army veteran Burgess Perry said he remembered feeling “fear of the unknown” when he first left the service. But when faced with two roads, he chose to follow the unknown path. He walked away from the medical field to become his own boss and entrepreneur while building a business dedicated to helping other transitioning vets confidently choose the road less traveled. Perry founded the Paint Corps franchise and has been wildly successful ever since.

After serving 10 years in the Army as a combat medic and later as a nurse, Burgess found himself struggling to find his place in the civilian world. He briefly dabbled in the familiar, working as a nurse in the healthcare industry. But he craved something new, more independence, and wanted to control his own schedule. He started American Veteran Painting, a house painting company. With just a few extra hands and a truck, he began his life as a business owner.

Perry grew his business to more than $2 million dollars in sales with 12 service trucks and 24 technicians. He knew in order to grow his business even more, he’d need to expand into franchises. He looked at similar business models, but only one had a mission statement that spoke to him. Perry reached out to long time friend and mentor Jack Child, owner of Veteran Service Brands (VSB), for guidance. Child is founder of a fleet of franchises marketed exclusively to veterans.

Child suggested that VSB could take on another franchise group, in addition to their three successful ones. It was the opportunity Perry was looking for to grow his business and really put to use his organization and project management skills acquired in the military to good use in the civilian world. Together, Paint Corps was born and it’s been growing ever since.

Perry started with one Paint Corps franchise but has grown to five today. He expects growth to continue expeditiously over the next five years.

Child is even more enthusiastic about the potential for Paint Corps.

“We’ve sold two Paint Corps in-house to existing G-Force franchisees and we have several new locations that will be signing their agreements shortly. This will be the largest of our brands by far; expecting to grow to 100 in the next few years.” Child said. “He’s got an incredible system built for success and recruits exclusively to veterans. Burgess is a post-9/11 vet and a great example of veteran entrepreneurial success.”

Perry enjoys the growth and the challenges that come with it.

“We are growing rapidly. We only started franchising a few months ago and we are seeing a lot of traction. We are the first painting franchise offered exclusively to veterans. But there are challenges. Sometimes there are hiccups when you own your own business, but as business owners, it’s our job to take care of it.”

Looking back, Perry has advice for those looking to start their own business. “For me, it took years of courses, education, business coaching and more to learn the ins and outs of operating a business. So I would wish that coming out of the military I could jump into one course to show me the things I have had to learn the hard way.”

Asked why he decided on this type of franchise, he said this: “The painting industry doesn’t have the standards you see in other fields. I thought it was a great opportunity to use my background in the military to bring my high standards to this industry. It was a way I could make it my own. Plus, the start-up costs were lower compared to other businesses. It was the right opportunity at the right time.”

Perry stresses that Paint Corps can be a good fit for any veteran regardless of background. “Even without any business experience or education, once you go through our training program located at the franchise training facility in Tampa, veterans will learn how to scale and operate a professional painting business.”

From Army medic to successful franchised business owner, Burgess Perry leveraged his skills learned in the military to build something completely new with long term success. But he was also able to simultaneously create opportunities for his fellow transitioning veterans to be successful. He turned his fear of the unknown into motivation to choose the road less traveled for himself and many veterans to come.