What to watch while you wait.

Similarly to Outbreak, the pandemic in 28 Days Later also starts out with infected monkeys. But unlike the virus in Outbreak, this one turns those infected into violent, ravenous zombies (think Dawn of the Dead on speed). Perhaps social distancing is especially important when it comes to our primate friends.

Based on Richard Matheson’s influential novel of the same name, I Am Legend is set in a world where mankind has been wiped out by a virus and a US Army virologist (played by Will Smith) is one of the last remaining humans. Along with his dog, he works to develop a cure for the virus while avoiding the zombie/vampire hybrids that come out at night. 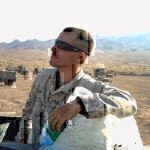 Mike Asper is a United States Marine veteran who served in Iraq during Operation Iraqi Freedom. He currently is the Art Director for G.I. Jobs and has seen way more movies than you have.

Article Name
Coronapocalypse Now: 7 Movies to Watch While Quarantined
Description
With the world losing its mind over COVID-19, many people are finding themselves holed up in their homes until this all passes over.
Author
Mike Asper
Publisher Name
G.I. Jobs
Publisher Logo