This is the Gear the Average Soldier Carried in WWII 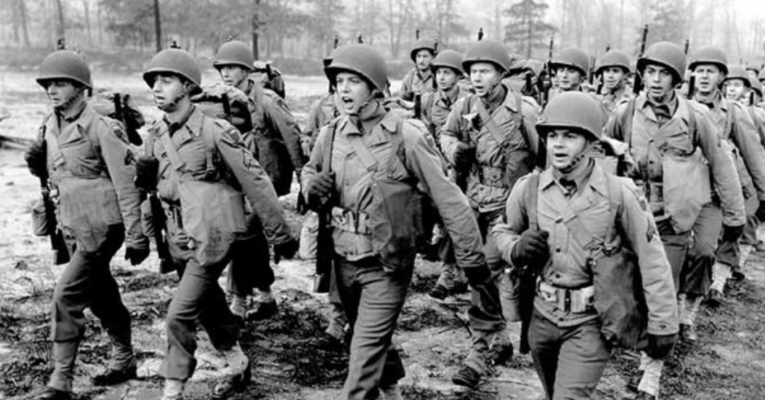 D-Day, the Battle of the Bulge, and Operation Market Garden; no matter the campaign and no matter the battle, our nation’s bravest men fearlessly surged forward to defeat the German threat in World War II.

Although each infantryman was responsible for various duties throughout the war, they were all issued similar gear.

The basic issue wasn’t anything like what troops receive today, but they made it work. Here’s what they carried to victory:

Related: This is why grunt gear isn’t for the average man

This waterproof bag carried everything the troop needed to sustain themselves while in the field, including toiletries, socks, a few rations, and whatever personal belongings they wanted to haul.

This belt contains pouches that hold 8-round clips of ammunition. At the bottom of each pouch is a small metal hole used for attaching other small pouches, including basic first-aid supplies.

Today, troops have a full supply of hemorrhage-control dressings. Back in WW2, all they had was this pouch, which contains one to two battle dressings for self-aid.

Also Read: This is what the average ‘doc’ carried on patrol in Vietnam

This was also typically attached to the cartridge belt for quick access. Troops never knew when the call to “fix bayonets” was coming, so they had to be ready, sharp, and easily reached.

This pouch includes a canteen, canteen cup, and mess kit — all made of aluminum. It wasn’t uncommon for a forward-deployed troop to eat and drink all of his rations from this container, as many meals served on the front lines came from a large, communal pot.

Also known as an entrenching tool or shovel, the E-tool was used for digging fighting holes and for driving stabler stakes into the ground. This tool was famously worn on troops’ backs and doubled as a fighting stick when sh*t hit the fan.

Related: This is how the shovel became a deadlier weapon than a bayonet

The average WW2-era helmet was comprised of a plastic liner and a steel shell. The liner helped the helmet fit on a troop’s head properly and, of course, the steel shell offered the troop some protection from incoming shrapnel.

This pack contained a half of a tent, tent pins, and a blanket. Many troops decided not to haul this practical pack around and simply brought a raincoat instead.

Check out the video below to watch a complete breakdown of what these heroes carried into battle.